2017-18 Player Review: Wayne Simmonds – He’s the ultimate warrior, but at what cost? 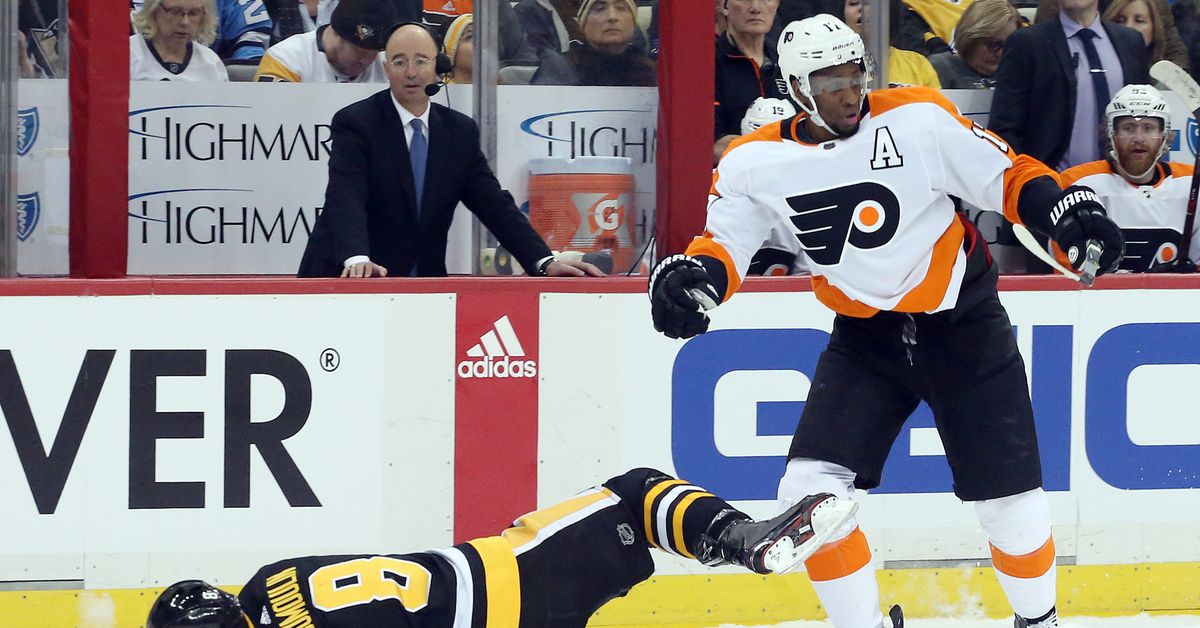 Wayne Simmonds immediately won over the hearts of Flyers fans when he first suited up for the orange and black at the beginning of the 2011 season. This was pretty important, as Simmonds was one of the key pieces acquired in a trade that sent former beloved franchise center Mike Richards to the Los Angeles Kings during the 2011 off-season. Since his acquisition, Simmonds has eclipsed the 30-goal mark twice, while also scoring 28 twice, 29 once, and was on a 27-goal pace during the lockout shortened season.

This year, however, the Wayne Train seemed to have lost a step. He didn’t appear to have his usual jump, his 5v5 play – while never really a strength – seemed to be hampered, and his physical edge was not nearly as present on the ice. Worst of all, as the season progressed, his effectiveness on the power play dwindled until finally being replaced on the first unit by 2nd overall pick Nolan Patrick. Something wasn’t quite right and everybody knew it. As expected once the off-season arrived, Simmonds revealed that he battled through a laundry list of injuries for the entire season. These injuries included a tear in his pelvic area, fractured ankle, pulled groin, multiple injuries to his mouth, and a torn ligament in his thumb. How did this litany of injuries effect his on-ice performance during the 2017-18 season? Let’s take a look!

This was Simmonds’ lowest total goal output in his seven years as a Flyer. Not only that, but his shot totals were down dramatically as well. Prior to this season, Simmonds averaged nearly 208 shots per year, but here we see a drop to just 176. His shooting percentage stayed right in the ballpark of where it has been since he became a Flyer, so the real issue seems to have been that Simmonds just wasn’t able to get the puck on net enough. As the season wore on, his power play performance slipped as well. His 11 power play goals were, again, his lowest output as a Flyer, and both the eye test and statistics were showing that Simmonds just wasn’t his usual self.

The bread and butter of SImmonds’ game is being able to get down low around the net, endure heavy net-front battles, and look for deflections and rebounds that he can easily stash behind the opposing goaltender. Right from the start of the season, Simmonds just didn’t seem to be getting into those areas and fighting those battles nearly as effectively. One would have to think this was largely due to the fact that he suffered the aforementioned pelvic area tear during training camp and opted to not have surgery to have it repaired. Doing so would have caused him to miss at least one month of the season, which was not an option for Simmer.

“I think for me, I don’t know if it’s the right thing, but I can’t not play,” Simmonds said. “It’s just geared in my head to where if I’m not dead or I’m not deathly sick, I’m going to try and get out there and do whatever I can. Whether the coach is going to play me, or whatever minutes he wanted to play me, that was up to him. I’m definitely going to sacrifice my body for the team, that’s for sure.” – NBC Sports

However, this proved to be a regrettable decision. The tear ultimately led to SImmonds pulling his groin, which effected his play even more. Talk about adding insult to injury…

So, how about his advanced numbers? Anything positive we can glean from those?

Unfortunately, Simmonds seems to be on a downward trend. This is the first season Simmonds has been below a 50% score adjusted CF% since 2013-14 and he has not been driving play all that well relative to his teammates. What’s even worse is SImmer’s point production rate trends. In 2014-15, he boasted a 1.51 P1/60 with a 1.92 P/60. The following season saw a considerable dip to 1.03 P1/60 and 1.14 P/60. This is scary. His primary point production has been cut nearly in half (0.86 P1/60) since the 2015-16 season, which makes one wonder if our friend Wayne really has fallen off the proverbial power-forward cliff.

Surely the injuries played a part in Simmonds’ decline this year, but the trend is currently going in the wrong direction. Simmonds is a warrior, a true Broad Street Bully, but so much so that his decision to not have surgery severely inhibited not only his individual on-ice play, but also his team’s performance. Granted, a Wayne Simmonds at 75% is still better than a lot of hockey players at 100%, but if this season was going to be hampered due to injuries anyway, it may have been more wise to get the healing process started sooner rather than later.

Did this player live up to our expectations for this season?

Unfortunately, no, he did not. We are accustomed to seeing Wayne Simmonds pot upwards of 30 goals per season, as well as cash in on net front battles as a fixture on the first power play unit. Neither of those were accomplished. While Simmonds remained as a leader for the team both on the ice and in the locker room, which cannot be understated, his on-ice performance was severely over par for the course.

What do we expect from this player next season?

This is quite a tough question to answer. One thing we know is that Simmonds had quite a bit of surgery this off-season to repair both the torn ligament in his thumb, as well as the tear in his pelvic region. The recovery time for the pelvic tear is at least one month, meaning Simmonds will have missed at least that much time for off-season training. Will he be 100% healthy come the start of the 2018-19 campaign? If so, considering he is as determined as he is and will be playing in the final year of his contract looking to make a case to remain a Flyer for the rest of his career, I would expect a bounce back type season from Simmer. I would look for at least 25 goals, 45-50 points, and better possession metrics more in-line with his career numbers. Of course if he’s not healthy then all bets are off.

What would we like to see this player improve on?

Obviously we would love to see Simmer improve his on his health, but that’s too easy, right? What we should want to see Simmonds improve on is getting back to being the Simmer we all know and love, but not at the expense of the team. Wayne, if you’re reading this, rest up, get yourself healthy, and don’t rush this. We need the Simmonds who can get down low around the net and win battles for pucks. We need the Wayne Train who will bowl his way over the opposition and create space for his linemates. We need the Simmonds who can clean up the trash around the net on the power play and the very next shift knock someone out in defense of his teammates. What we absolutely need to see improvement on, though, are the underlying possession metrics and an ability to drive play in the offensive zone. The first step is getting healthy and the rest will *hopefully* follow.