A look at the fallout of the Pens trading Derek Grant, and is Garrett Wilson actually good? – PensBurgh 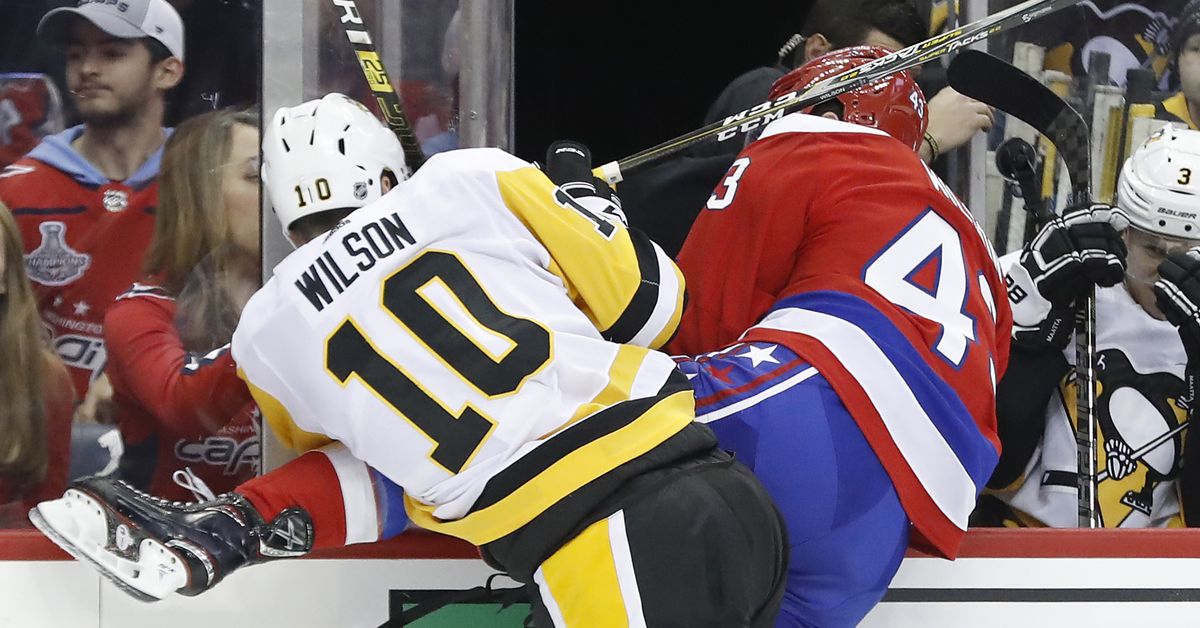 Late last night, the Penguins traded forward Derek Grant to the Anaheim Ducks for Joseph Blandisi. It’s a minor enough move, but with rumors about Derick Brassard everywhere, it’s natural to instantly wonder what this could have in store for how the team shapes up in the future.

Jason Mackey at the PG got some quotes from general manager Jim Rutherford about what went down and how it plays going forward:

“Part of the deal [to trade Grant], aside from us liking this younger player, was to have more flexibility on that 13th forward,” Rutherford said. “Derek ended up being the healthy scratch for a long time. Now we have the flexibility of bringing whoever we want up from Wilkes-Barre.”

Mackey would go on to write:

..pay attention to Garrett Wilson. Rutherford likes him a lot, and what Wilson has done with the NHL club has not gone unnoticed.

“We like the role that Wilson plays,” Rutherford said. “This opens the door for him.”

Wilson hasn’t added much offense, but he has been solid on the penalty kill, throws his body around, and his Penguins teammates like him a lot. If there’s a situation where a fight is warranted, Wilson isn’t the least bit shy about doing that, either.

“Probably Wilson is the key guy we talk about,” Rutherford said. “He brings special elements to our team, the leadership, the physical play and whatnot that we really like.”

It makes sense – Grant is on the fringe of being claimed on waivers by another team (even though he did clear them on October 10th at the beginning of the season). Trade him to at least get a player in Blandisi who if assigned to the AHL probably is more of a factor there, as his 23 points in 27 games with AHL San Diego this season indicate.

It also keeps a player like Wilson, that the team obviously likes, in a 13th forward type of role that Grant was previously in. Is it possible that’s actually an acceptable move and that Wilson might be offering more than perhaps his reputation carries?

love that the Grant deal was done in part to free up a spot (probably 13th F) for Wilson. he gets shit for a low raw point output but it’s hard to imagine a better 4th liner. absolutely tilts the ice & draws penalties while taking nothing but DZ draws pic.twitter.com/n5Bss8o3A9

With zero goals in 51 NHL career NHL games, Wilson is a tough sell to actually get behind too much as a valued player. But he does have two assists in 17 games as a Penguin this season, which given his low ice time is enough to look pretty decent enough for assist rates.

Per Natural Stat Trick, Wilson’s Corsi For percentage at 50.2% is a step ahead of Grant’s at 47.6%. The Pens have also only given up two goals against while Wilson has been on the ice at 5v5, for just 0.99 GA/60. Grant’s number there is good at 1.86 GA/60 but not as good. Wilson has also suppressed high danger scoring chances against, with just 7.89 allowed per 60, best among forwards on the team. And he’s done this despite a super-high 32 of shift starts in the defensive zone per 60 (compared to just 4 offensive zone starts/60). It’s still a fairly small sample size given he doesn’t play a lot, but the point is Wilson is performing very well in the role that he’s been given.

Basically Wilson is a 6-8 minute per game player with a little bit of size that plays an honest game, won’t hurt the team defensively, and will throw his body around physically. He’s the type of player that coaches trust and rely on for being in a lane they should be in to block a shot or pass or throw a hit on the forecheck to help turn a defensive zone-start into gaining possession back.

When Zach Aston-Reese and Patric Hornqvist are healthy — and the latter flew out to meet the team in Arizona and may play Saturday night in Vegas — Wilson is going to be a scratch. No way around that and also as it should be.

But since Wilson has been a fairly dependable player to the organization, his stock has improved. And though he offers very little in actual production and absolute zero in goal scoring at the NHL level, his ascension in the eyes of the organization probably drove Derek Grant to being an expendable piece. So that was why the Pens were able to get a little younger by swapping him out for Blandisi.

Even though the knee-jerk reaction is going to be to tie this to Brassard and what might happen, this move really isn’t a precursor for a future Brassard trade, which needs to happen anyways independent of this deal. This latest Pens-Ducks trade was about Pittsburgh re-shuffling the 12/13/14th forwards on the team and shifting away from Grant and towards Wilson who has been doing a better job for them this season.