Boston Bruins Week 22: The Injury Bug is Back Edition

The Boston Bruins may have gone 3-0-0 this week, but the two injuries that struck the team are this week’s biggest stories.

First, Boston Bruins star center Patrice Bergeron went down with a foot fracture and will be out at least 2 weeks.  Definitely not a positive for this team, but if Bergeron’s foot heals perfectly and is only out 2-3 weeks, he’ll be ready for the playoffs and he will be rested for an extra few weeks and be a be fresh come playoff time.

But, Charlie McAvoy could be an entirely different case.  After only 37 seconds on the ice in Saturday’s game, McAvoy awkwardly fell to the ice and limped off the ice in considerable pain.  He was quickly diagnosed with a lower body injury and would not return to the game.  No update was given after the game and more should be known on Monday.

Bruce Cassidy on Charlie McAvoy: “It’s a lower-body injury…team is off tomorrow, we’ll have a better idea on Monday. Hopefully it’s not serious.”

We don’t know the extent of the injury just yet, but it did not look good and McAvoy could be out awhile.  Hopefully it is not serious and he is able to return in time from the playoffs, because even with the depth on the blueline the Bruins have, nobody can replace what McAvoy brings to this team on both ends of the ice.

Onto the on ice results this week, the Bruins couldn’t have been better as they had 3 games and got 3 wins in an attempt to keep up with Tampa Bay for the Atlantic Division crown.  The games were highlighted by the offensive explosion and a win against the rival Canadians with a late equalizer and eventually an OT winner.

After the stinker of a game in Buffalo on Sunday, the Bergeron news broke.  His injury means that Riley Nash jumps up to center the first line between Brad Marchand and David Pastrnak for the time being.  In an explosive first period, Rick Nash got things started with an insane goal line clearance that saves a goal and keeps the game 0-0.

The first goal of the game belonged to the Hurricanes as Brock McGinn batted a rebound home in front of Tuukka Rask at the tail end of a PP to give the visiting Canes an early 1-0 lead.  Less than 2 minutes later, in his second game as a Bruin, Rick Nash scored to equalize the game at 1.  A good forecheck by Jake DeBrusk freed the puck for David Krejci who sent the puck to Nash who was left all alone in front and he fired one past Scott Darling to tie the game.  That goal was Nash’s 800th career NHL point as well.

The goal scoring would not stop there as the Hurricanes would add two more to regain their earlier lead.  Teuvo Teravainen would snipe one on the PP for a 2-1 lead, then Sebastian Aho would add their third tally of the period off of a slick backhand on a mini breakaway with under a minute to go in the period.

With under 10 seconds to play, the newly acquired Tommy Wingels stole the puck in front of the Huirricanes’ net and the other Nash, this being Riley, would slide it past Darling on the backhand right before the horn sounded to make it a 3-2 game after 20 minutes.

In the second period, Tommy Wingels would continue his great Bruins debut and would snipe one past Scott Darling to tie the game at 3, just after 5 minutes into the period.  The goal scoring would stop there as both teams had 3 goals after 2 periods.

Both teams couldn’t find the scoreboard in the 3rd period, and the teams would head to overtime.  Just over a minute into the extra period, the Bruins burst up the ice on a 2-on-1 rush and stud defensman Charlie McAvoy wired one glove side on Darling to give the Bruins a come from behind 4-3 victory in OT.

The Bruins would then host the two time defending Stanley Cup Champion Pittsburgh Penguins, and it is was the craziest, offense first, defense last game you might ever see.  In just the first period alone, there were 8 goals combined the two teams.  The Penguins would get the scoring started as Olli Maatta’s blast would beat Rask, just 35 seconds into the game.  Then in a span of 5 minutes, the Bruins would score three times.

First it was David Krejci converting from a great feed by Rick Nash, followed by Riley Nash deflecting a Pastrnak shot into the goal, and third a Rick Nash power play tap in goal to give the Bruins a sudden 3-1 over the Penguins.  That would end the night for their goalie, Casey DeSmith who was pulled after 3 goals allowed on 5 shots. 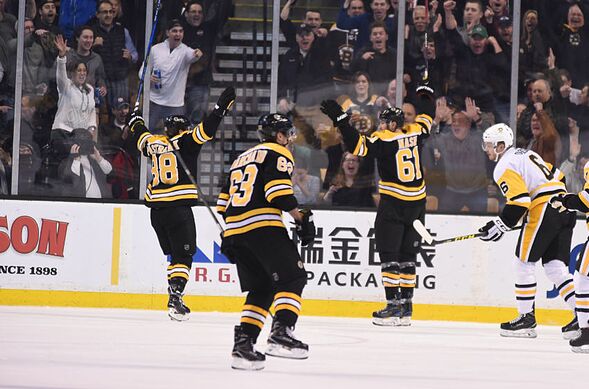 A Phil Kessel snipe shortside on Rask would cut the deficit to 1.  Rask usually stops that shot, but not much was being saved in this period by either goalie.  A wonderful shot by David Backes would restore the Bruins 2 goal advantage, before a Torey Krug bomb would beat Pens goalie Tristan Jarry to give the hosts a 5-2 lead late in the 1st period.  But, before the period was over a Riley Sheahan slapper would blow by Rask with 3 seconds remaining in the period to cap a wild and hectic 20 minutes.

In the 2nd period, the B’s would score another three times to put the game to rest.  Krejci would score twice in the second period to complete his hat trick, his first 4th of his career.  After Krejci’s hat trick was completed, the Bruins were in control with a 7-3 lead over the defending Stanley Cup Champs.  David Pastrnak would add another Bruins tally for their 8th goal of the game and the Bruins had a 8-3 lead after 40 minutes of play.

Entering the final period, the result was not in question with a 5 goal advantage, I was selfishly wanting the Bruins to put up a 10 spot, but that didn’t happen.  The only goal scored in the period was Olli Maatta’s second of the game.  The Bruins crush the Penguins and win 8-4.

For the final game of the week, the Bruins hosted the Canadians for their final matchup of the season.  As mentioned earlier, Charlie McAvoy went down with a lower body injury after 37 seconds on the ice.  Playing with only 5 defensemen for almost the entirety of the game, the Bruins fell being once again.

A Kevan Miller breakout pass was stolen by Brendan Gallagher, who rocketed the puck past Anton Khudobin.  Anton was starting in place of Tuukka Rask who had a minor illness and should be ready to go for Tuesday’s game against Detroit.  The Bruins couldn’t beat Canadians netminder Antti Niemi and the period ended 1-0.

For almost the remainder of the game, the Bruins still couldn’t solve Niemi and while they had many chances, it was looking like Montreal might steal 2 points.  But, late in the third period, on the PP a Nick Holden centering pass found the stick of Jake DeBrusk, who tipped it past Niemi to tie the game at 1.  The game would then head to OT, and after some serious zone time by the Bruins, a Brad Marchand shot squeaked through Antti Niemi to give the Bruins a dramatic 2-1 win in OT.

Next: David Krejci is player to watch going forward

After a 3 win week, the Bruins play three more game at home before traveling to the Windy City on Sunday.  The injuries to major players might have an impact here, especially on the Chicago back to back, but the Bruins have great depth and should be able to continue to chase the Lightning for 1st in the Atlantic Division.  I see the Bruins going 3-1-0 this week, only losing one of the games to the Blackhawks, probably the game on Sunday afternoon.