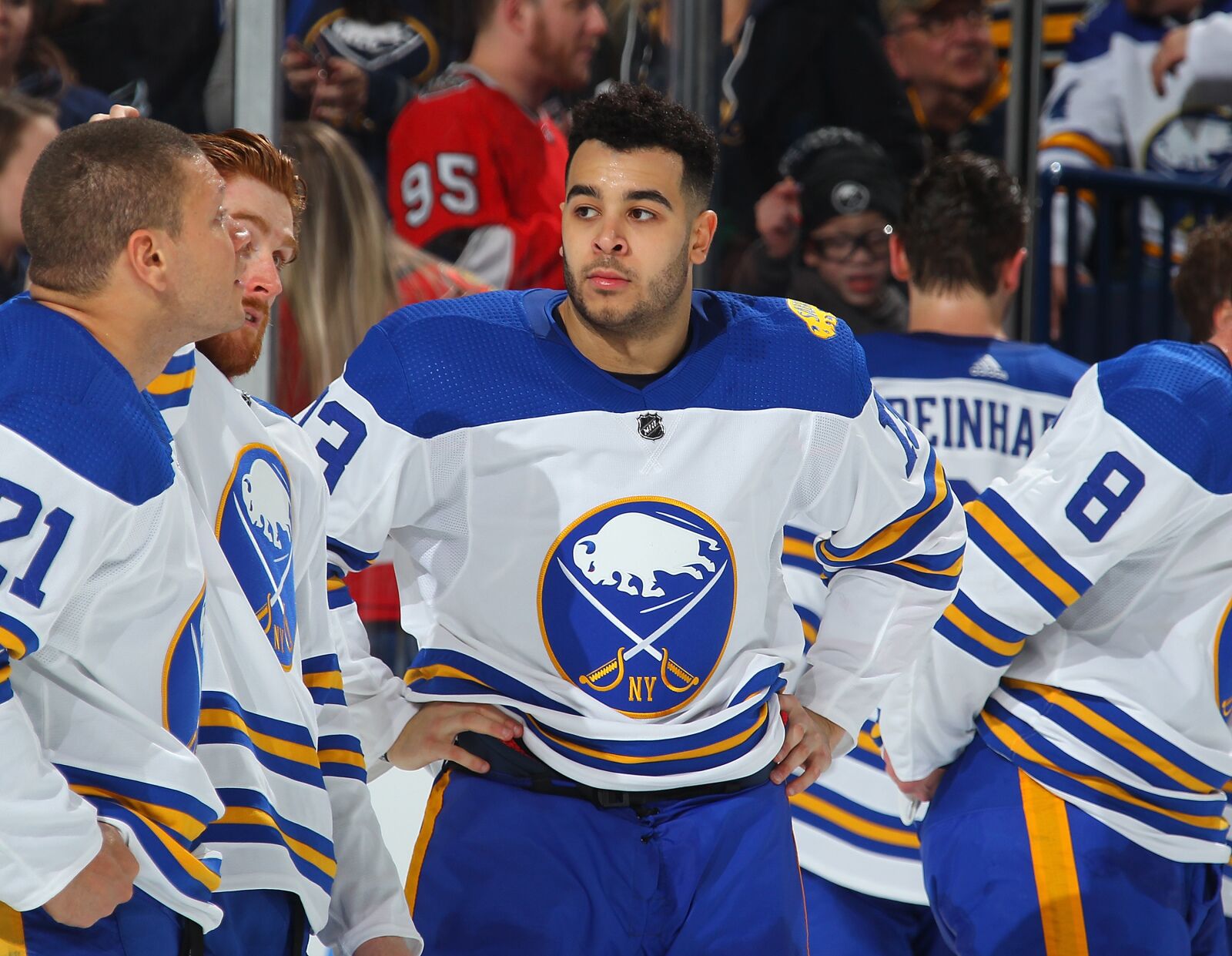 The Buffalo Sabres had a busy Monday afternoon as we are only days from opening night.

The day started with the Sabres assigning 3 players to Rochester: forward Alexander Nylander and defensemen Brendan Guhle and Brandon Hickey.

After the Nylander move, the Sabres are down to 12 healthy forwards. According to John Vogl of The Athletic, the top 12 forwards are as following:

Sabres have exactly 12 healthy forwards, so either Larsson or Wilson aren’t hurt bad, or another move is possible by Thursday’s opener.
Skinner-Eichel-Reinhart
Sheary-Berglund-Thompson
Sobotka-Mittelstadt-Okposo
Girgensons-Rodrigues-Pominville

The biggest take away for me from this group of forwards is Tage Thompson. Thompson, who came over in the Ryan O’Reilly trade, had a goal and 2 assists this preseason and spent time playing on the top line with Eichel and Skinner. Thompson could be reunited with former St. Louis Blues teammate Patrik Berglund on the second line to start the season.

Also happening today in regards to the forwards, the team announced that Scott Wilson had successful surgery to repair an ankle fracture and is expected to miss 8-10 weeks. Wilson was injured at the end of practice yesterday. Unless they make a move, Johan Larsson will be the extra forward to start the season. Larsson had 17 points in 80 games for the Sabres last season.

The other big news of the day for the Buffalo Sabres was trading forward Nicholas Baptiste to the Nashville Predators for defenseman Jack Dougherty. Baptiste cleared waivers and was set to head to Rochester after playing 33 games with the Sabres last season. Back in training camp, Baptiste commented on the position battles:

“You’re definitely aware of everything that happens in the offseason. You know the spots and you know how many guys they brought in,.” – Nicholas Baptiste

With Guhle and Hickey heading back to Rochester, the Sabres have the following defensemen still on the roster: Rasmus Dahlin, Zach Bogosian, Marco Scandella, Rasmus Ristolainen, Jake McCabe, Casey Nelson, Nathan Beaulieu, Matt Tennyson, and now Jack Dougherty. Dougherty, the 2nd round pick of the Predators in 2014, has 2 full seasons under his belt in the AHL with the Milwaukee Admirals. Phil Housley has yet to announce who will fill the final spots on defense.

How do you see the roster for opening night panning out? Let us know in the comment section below.