Burn the Tape: Dismal New Jersey Devils Downed by New York Islanders 1-4 – All About The Jersey 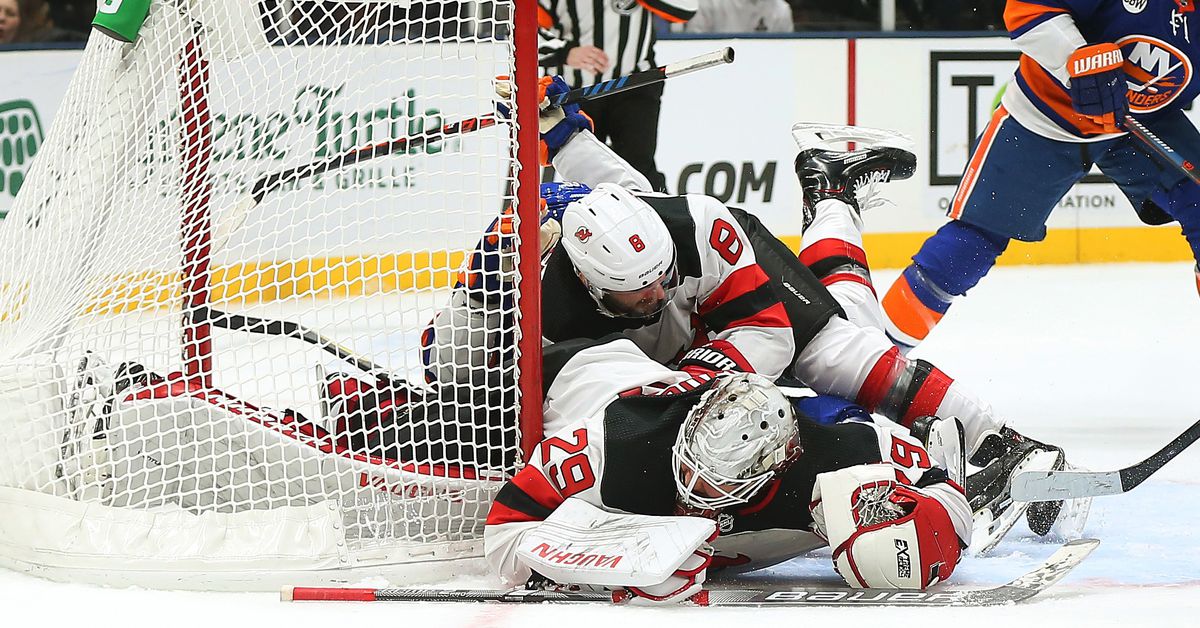 With a game on the road against a surging New York Islanders team, the New Jersey Devils had a tall task to face tonight. Unfortunately, they didn’t come prepared to face much of anything, and as has been the case numerous times this campaign, the game was sadly decided before the end of the first period.

The game started off well, with the Devils controlling play and not allowing the Islanders to get off a shot for the first five minutes. I wish I had something else positive to say about the first period, but at about that point everything went downhill. Anders Lee would score a goal on a deflection due to Damon Severson getting picked by Pavel Zacha defending his man. I’ve spoken about how this continues to be a problem with the Devils’ current system, and they paid for it again.

Cj wrote a post about John Hynes sort of trusting Will Butcher more; after tonight, I would send him right back to sheltered minutes city, as he demonstrated some of the worst defense I’ve seen all year in allowing Michael Dal Colle to deflect another shot past MacKenzie Blackwood. The Isles would get one more on their only power play of the period, when Jordan Eberle rifled a close range shot over Blackwood’s shoulder, and while Bryce Salvador mentioned at intermission that he probably wanted one back, the defense again did not help, as Sami Vatanen looked as though he screened MB29.

The power play could have made a difference in its pair of chances, but instead it looked putrid. Brian Boyle may be a “big body in front of the net” but his lack of puck carrying ability and speed hurts a PP lacking Taylor Hall. Blake Coleman should have his spot out there at least until Hall returns. Every time the puck went near Boyle on the PP, it was cleared pretty quickly after. The Islanders 3-0 lead would take them comfortably into the locker room.

If you thought it still couldn’t get any worse, you’re partly right and partly wrong. From a score standpoint, the game thankfully did not get any worse. From a play standpoint, the Devils were being run into the ground by the Islanders. Travis Zajac’s line with Blake Coleman and Kyle Palmieri was visibly trying to make something happen (Palmieri sometimes trying too hard) but their efforts did not lead to anything happening on the scoreboard.

The team passing continued to be an issue; no one was making clean passes, and any made were usually too far or easily read by the Isles. For a team that’s supposed to be “fast, supportive, and attacking” the Devils looked like anything but; Matt Martin was skating around Devils with ease. While some of the responsibility falls on the players, the fact that the same issues keep happening this season indicates a deeper problem.

Blackwood settled in, made a bunch of saves, and the 3-0 score would remain the same at the second intermission.

The third period was off to the same crummy start as the latter two; Palms took a bad tripping penalty at the end of the second which carried over into the third. Just as it was about to expire, Brian Boyle took a bad hooking call and prevented the Devils from attempting to push back even longer.

The Devils would get on the board just over seven minutes into the final frame as Damon Severson would blast a slapper on net and his partner Andy Greene would get a stick on it to push it past Robin Lehner. That would be the closest Jersey’s Team would get; Blackwood would get pulled with close to three minutes left. The Devils would put the puck in and Boyle would be on the ice to get it taken away again; I love Boyle, but this is not using him to the best of his abilities. The Isles would push the other way, Will Butcher would again show some weak D and Anders Lee would add an empty netter to get us to our final of 4-1. I’ll be honest right now, this game was such a stinker that if I wasn’t providing tonight’s recap, I would have shut it after the first period.

The Opposition Opinion: Dominik over at Lighthouse Hockey has this recap of tonight’s tilt.

The Game Highlights: NHL.com will have a recap video but take my word (and recap) on it, do yourself a favor and don’t bother watching.

Not-So-Advanced Stats: I’m not going to go very in depth here tonight, but Damon Severson and Blake Coleman were the only players at or above 50 CF% which shows the general awfulness of the team. Will Butcher got absolutely murdered on the ice, tied for the team low in CF% of 23 with Kevin Rooney; Sami Vatanen was not much better either. As the title says, burn the tape. You can make the case that being vastly outshot in the second affected these numbers, but I’d arguing that playing like a tire fire had a greater affect.

Don’t Blame Blackwood: Whenever a team loses by a wide margin, and the opposition doesn’t take a crazy high amount of shots (New York had 26) initial reactions tend to be blaming of the goalie. On goals one and two, Blackwood had little to no chance to save a redirected shot where his teammates couldn’t be bothered to cover their man, and goal four was into an empty net. At most, you have one goal that you can possibly fault MB29 on (it was honestly a well placed, fast wrister) and that’s your goalie giving you a chance to win. The Devils defense, as usual, wasn’t good enough and let them down again tonight.

Coaches and their Accountability: How many times will we be forced to endure the same script this season? While the Devils are not the most talented team in the NHL, the Islanders are a perfect example of a coach that instills a system that works and wins games even without a roster full of superstars. Why is that so hard for the Devils to do? People like to give Coach Alain Nasreddine credit for the PK, but I’d argue that with Zajac and Coleman playing it, the PK would be fine with any coach. Instead, why don’t we look at the fact that no defender is improving under this regime. If Ray Shero wants to keep John Hynes fine, but maybe let’s replace an assistant or two to help actually grow our players.

A Final Thought: Can we just convert Travis Zajac to some sort of hybrid faceoff defenseman? He honestly plays better defense than the guys we pay specifically for that role and maybe then we could win some more games.

Your Take: Another disappointment from the 2018-19 Devils; road games all season long have been terrible for this team and responsibility needs to be shared among all responsible from ownership down to the players on the ice. This season has seemingly slipped away and the only ones seeming to be taking the blame are the players. Please leave your comments below on the game or on who should be blamed for this season’s mess.

Thank you to Chris for the game preview, to Mike for providing coverage on the @AAtJerseyBlog account, and everyone who commented in the gamethread. Thank you all as always for reading.