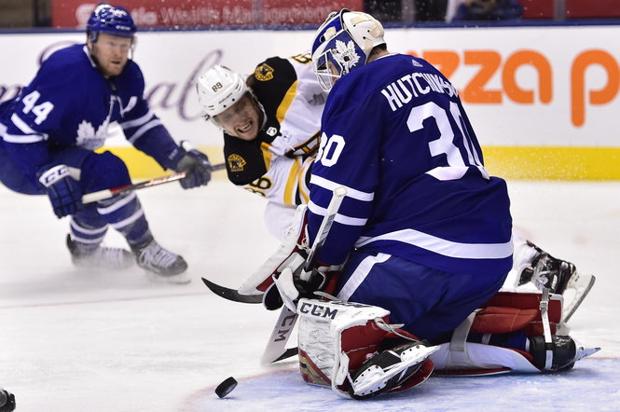 Sean Kuraly had a goal and two assists, and David Krecji also scored for Boston.

Tuukka Rask made 30 saves as the Bruins won the season series between the teams 3-1 and moved two points back of the Leafs for second place in the Atlantic Division.

Kuraly intercepted a soft pass behind the net by Leafs defenseman Nikita Zaitsev and fed Pastrnak, who scored his 26th goal of the season past a surprised Hutchinson with 13.7 seconds left in the middle period.

Pastrnak has 19 points (11 goals, eight assists) in 15 career regular-season games against Toronto — including six goals and three assists in four outings this season.

Hutchinson scrambled to stop a chance by Pastrnak early in the third period to keep Toronto in it.

Auston Matthews had an excellent opportunity to tie with four minutes to go, but shot a backhander wide.

Toronto pressed late with an extra attacker, but Boston was able to hold on.

Boston led 1-0 after the first, but the Leafs got even at 7:37 of the second on a strange play. Johnsson’s quick shot went off Rask, off Bruins defenseman Kevan Miller, who was battling Matthews in front, and dribbled into the Boston net for the winger’s 10th.

Toronto’s struggling power play — 1 for 36 over its last 13 game when removing a 3-for-3 effort against Florida on Dec. 20 — came to life 1:53 later and gave the Leafs their first lead when Marner blasted a shot that beat Rask on the short side. It was Marner’s 17th.

But the Bruins capitalized on another gaffe by the Leafs at 14:47 when Jake Gardiner fanned on a breakout pass before having the puck stolen by Chris Wagner, who fed Kuraly in the slot. He scored his fifth.

Hutchinson, who spent three seasons in the minors with the Bruins after getting drafted 77th overall in 2008, got his fifth straight start for Toronto with No. 1 netminder Frederik Andersen — sidelined since Dec. 28 with a groin injury — out with the flu and backup Garret Sparks still recovering from a concussion.

Boston’s top line of Pastrnak, Patrice Bergeron and Brad Marchand entered Saturday with a combined 117 points in 122 regular-season games against Toronto. The trio torched the Leafs for 30 points in last season’s first-round series.

Krejci opened the scoring with 1:39 left in the first period. Kuraly turned back in the offensive zone and fed Krejci, who scored past Hutchinson for his ninth.

The Bruins had two golden opportunities to take the lead early, but Marchand missed a wide-open net in the game’s first minute before Bergeron fired wide on a 2-on-1 moments later.

Rask, who entered 4-0-0 with a .959 save percentage, a 1.23 goals-against average and a shutout in his past four starts, stopped Kadri on a wraparound before Zach Hyman’s deflection went just wide.

NOTES: Charlie McAvoy, who missed 20 games with a concussion earlier this season, returned to the Bruins lineup after missing the last seven with a foot injury. Boston had its top blue-line corps dressed together for the first time this season. Pastrnak and Krejci are the only players on the roster to play in each of their team’s 45 games this season. … Canadian astronaut Chris Hadfield was in attendance.