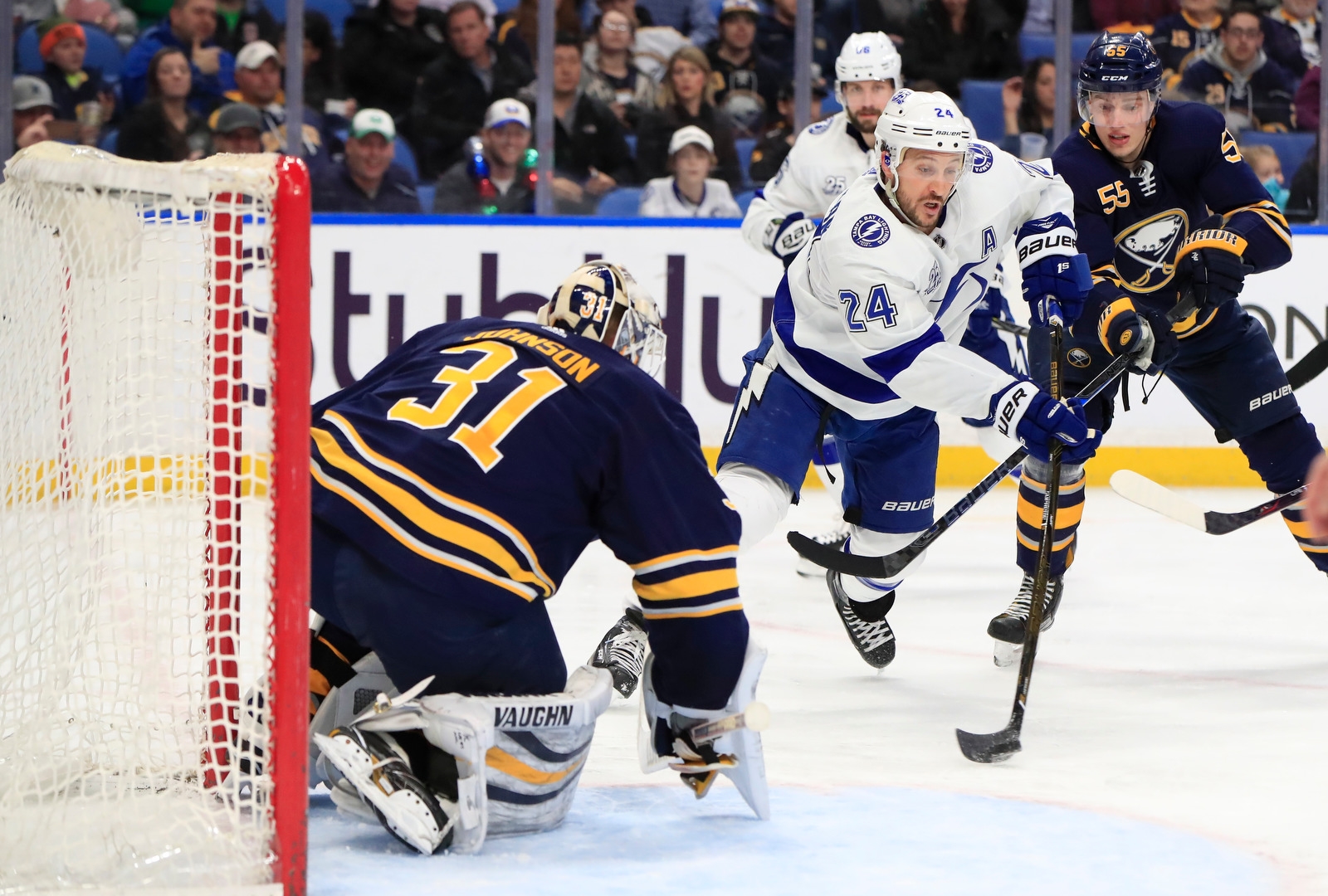 TAMPA, Fla. – The Sabres have knocked off the top team in the NHL once. They’ll go for two in row Wednesday night on Tampa Bay’s home ice.

Here are Five Things to Know as Buffalo visits the Lightning at 7 p.m. in Amalie Arena.

1. Look to past success

The Sabres upset the Lightning, 5-3, in Buffalo on Feb. 13. The Sabres had a 33-29 shot advantage, keeping the high-scoring Lightning relatively quiet. Buffalo will look to beat Tampa twice in a row for the first time since 2013.

Tampa has been rolling since the loss, winning five of six and four in a row. Tampa is also running on the high of Monday’s NHL trade deadline. The team added defenseman Ryan McDonagh and forward J.T. Miller from the New York Rangers.

McDonagh is out for another week with an injury, but Miller will make his Tampa debut.

“It’s important you try to get into it as early as possible, try to get a few hits, a couple of touches on the puck,” Miller said after the morning skate. “Just be simple early. Don’t try to make it too hard on yourself.”

Sabres right wing Seth Griffith will skate with the NHL club for the first time since Nov. 25. Griffith had two goals and three points in 18 games before being sent to Rochester.

“Just up here, I’ve got to continue to move my feet the whole game,” Griffith said. “Sometimes I get away from that and I tend to try to slow down the game a bit. I just want to come up here and play a solid five-on-five game and prove to the coaches that I can play at this level and I deserve to be at this level.”

Griffith will skate with center Jacob Josefson and left wing Jordan Nolan. He also will be on the second power-play unit with forwards Benoit Pouliot and Nick Baptiste, and defensemen Victor Antipin and Marco Scandella.

“I’m a power-play guy,” Griffith said. “I try and make plays out there. At this level, you’ve got to play an all-around game. It can’t be just on the power play. It’s obviously nice to be on the power play, and I think just with power-play time it gives you confidence five-on-five.”

Kyle Okposo and his wife had a baby girl, so the Sabres right winger won’t face the Lightning. He’s expected to rejoin the lineup for Friday’s road game against the Florida Panthers.

“We’ll see Kyle on this trip, but he won’t be playing tonight,” coach Phil Housley said. “They had the baby, a baby girl, and it was a long night. So instead of getting a tired player, we’ve brought up Seth Griffith, who’s going to get an opportunity to show what he’s going to bring to our team.”

The Sabres’ lineup will be:

Defenseman Josh Gorges will be a healthy scratch.

Sabres goaltender Chad Johnson will get his second consecutive start after making 34 saves in Sunday’s 4-1 victory over Boston. Johnson was also in goal for the victory over Tampa.

“For it’s just the overall team and the effort the guys are doing in front of me,” Johnson said. “Early on, there’s adjustments that are being made with a new coaching staff. I don’t think you were seeing our team game how it was, and I think as a goalie sometimes you get affected by that.

“Now you’re seeing how limited the scoring chances are, the quality scoring chances that we’re giving up is a lot different. That obviously helps myself out and I think we’re starting to see some better results personally. I’m getting more confident, and I think the team’s getting more confident in me, too. Just the overall game in how we’re playing defensively is definitely affecting my results.”

The Sabres will wear a Stoneman Douglas sticker on the back of their helmets Wednesday and Friday to honor the shooting victims at the Florida high school. … Tampa Bay is 15-3-1 in the last 19 games against Buffalo. … The Sabres are 4-0-1 in their last five Atlantic Division games. … Sabres right wing Sam Reinhart has points in four straight games. He has seven goals and 20 points in his last 19 games.