New York Rangers: The snowball effect of losing is contagious by Nicholas Zararis

New York Rangers: Sneaking past the Blackhawks 4-3 by Sam Prevot 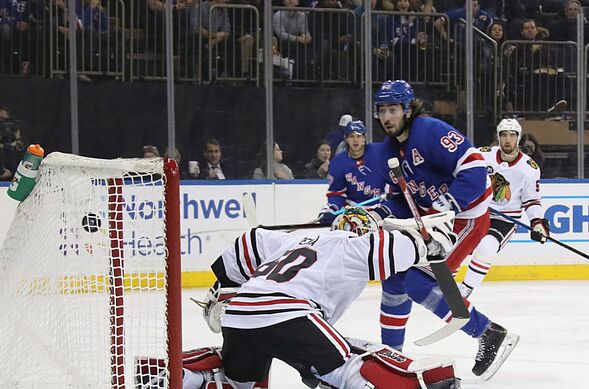 NEW YORK, NEW YORK – JANUARY 17: Mika Zibanejad #93 of the New York Rangers scores against Collin Delia #60 of the Chicago Blackhawks but the goal is disallowed because the play was offside during the second period at Madison Square Garden on January 17, 2019 in New York City. The Rangers defeated the Blackhawks 4-3. (Photo by Bruce Bennett/Getty Images)

The New York Rangers beat another one of their lottery rivals Thursday night.  The win over the Blackhawks give them 47 points and moved them from 8th worst in the league to 10th worst.  The loss sent the Hawks tumbling into last place overall  in the NHL.

Wins don’t help the New York Rangers lottery dreams, but they keep another dream alive, making the playoffs.  With the win, the Rangers moved to within nine points of the last wild card spot, currently occupied by the Pittsburgh Penguins.  They are 11 points behind the Islanders, currently in third place in the Metropolitan Division.

Besides the Ranger game, there were four games involving lottery contenders.  The night ended in a split decision with two teams winning and two teams losing.   That  means the Rangers moved up two slots from 8th from the bottom to 10th.  They are still only  six points from last place Chicago.

It was too much to ask St. Louis to beat Boston after upsetting the Capitals and taking the Isles to OT.  The Bruins won handily 5-2 and will be waiting for the Rangers on Saturday.  The Blues dropped two points  behind New York.

The Islanders continued their hot play and maintained their hold on third place in the Metropolitan Division with a convincing 4-1 win over the Devils who are now four points worse then the Blueshirts.

The Anaheim Ducks endeded their 12 game losing streak with John Gibson pitching a 3-0 shutout over the Minnesota Wild.   Anaheim moved up a slot with the win and are tied point-wise with Edmonton and Carolina, all with 49 points.

In the late game, the Los Angeles Kings were outshot 30-19, but beat the Dallas Stars 2-1 on the road.  That’s four straight losses for Dallas.  With the win, the Kings move out of last place into 3rd from the bottom, ahead of Chicago and Ottawa. They are tied point-wise with the Flyers and the Panthers, all with 42 points.

There are seven games in the NHL Friday, five of the games have lottery consequences.

Maple Leafs @ Panthers – Florida now has five fewer points than the Rangers (though they’ve played three fewer games).  The Maple Leafs are coming off a big win against Tampa, let’s hope they are hungover.  Root for Florida.

Senators @ Hurricanes – Carolina is two points better than New York.  Ottawa has 41 points to the Rangers’ 47.  Root for the Senators.

Red Wings @ Flames – Detroit is now four points behind the Rangers so the Blueshirts need them to win to keep pace.  It’s  a tall order against the Flames in Calgary.

Penguins @ Coyotes – Arizona has been playing over .500 hockey so they could give the Penguins some trouble. The Pens have lost two in a row and are clinging to the last wild card spot.  A Coyotes win puts them ahead of the Rangers in the standings. Go Yotes.

Sabres  @ Canucks – The Rangers are one point behind the Canucks, eight points behind Buffalo.  Root for Vancouver to win.

Next: The snowball effect of losing.

One more game for the Rangers before their bye week and the all-star break.   A win in Boston will send the Ranger home on a high note and revive their playoff hopes.  It will also put them in a tough lottery position with them really needing their rivals to win while the Rangers are on their break.   Let’s see if they can make it three in a row.  We may have to revive the daily Playoff Picture if they do.