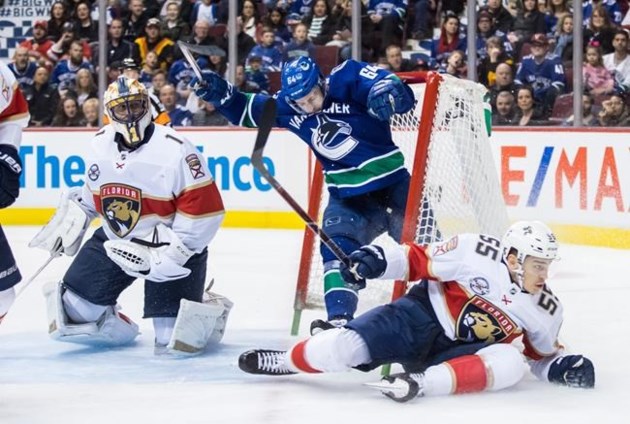 Vancouver Canucks defenceman Ben Hutton says his team had something to prove when they lined up against the Florida Panthers on Sunday night.

“We’ve got some bad blood with them. Obviously, everyone knows that,” he said.

When the squads last met in October, Vancouver’s star rookie Elias Pettersson was the victim of a controversial hit by Panthers defenceman Mike Matheson. No penalty was called on the ice and Pettersson ended up missing two weeks with a concussion.

“We wanted to come out and play hard,” said Hutton, who scored the eventual game-winning goal. “Play within the rules, but play hard. And make sure everyone knows that you can’t really mess with one of us.”

Matheson — who was handed a two-game suspension by the league for the hit — was challenged to drop the gloves several times but didn’t take the bait. Every time he touched the puck, loud boos emanated from the Vancouver crowd.

Vancouver defenceman Erik Gudbranson said his team was good about not crossing the line with Matheson.

“You don’t want to do anything stupid in a one-goal game,” he said. “Guys tried, tried early. But at a certain point, if he’s not willing to do it, that’s on him. We’ve got to go and win two points.”

Instead, Gudbranson went head-to-head with Florida’s Michael Healy, exchanging blows for nearly a minute near the end of the first period.

“Hockey’s still hockey. The blood boils,” Gudbranson said. “And it was a good showing by our team.”

“I never talked about it once and I don’t know if they talked about it as a team, but I thought they responded exactly how you should — won the game,” he said. “No one did anything cheap or dirty and that’s it, end of story.”

Loui Eriksson tallied a goal and two assists for Vancouver in the victory.

Midway through the second frame, the left-winger picked off a pass from Mike Hoffman at the Panthers’ blue-line and drove into the offensive zone. Eriksson finished with a wrist shot in behind Florida netminder Roberto Luongo.

He admitted that scoring has been tough lately, so finding the back of the net was a relief.

“It hasn’t come easy. So all you can do is just work hard and just keep working. And things will turn around,” Eriksson said. “It was definitely nice to score that one tonight. And now on to the next one.”

Brock Boeser and Jay Beagle both put away empty-netters for the Canucks, and Markus Granlund added one more goal, scoring with just 11 seconds left on the clock.

“We had some guys, especially some of our big guys, have very average if not below-average games and you can’t win hockey games that way,” said Panthers coach Bob Boughner.

Jacob Markstrom stopped 23-of-24 shots for the Canucks and Luongo put up saves 31 for the Panthers.

Despite playing for the visitors, the former Canucks netminder received raucous cheers of “Louuuu!” from the crowd every time he stopped the puck.

“It’s always nice to come back here and fans are great,” said Luongo, who played eight seasons with the Canucks before he was traded to Florida in 2014. “It’s always special, it will always hold a special place in my heart.”

The 39-year-old shot down rumours that Sunday’s match up would be his last in Vancouver.

“I don’t know where that came from,” he said after the game. “I never talked about that before, so it was kind of funny to see a lot of people talking about it.”

The Panthers continue their Canadian road swing on Tuesday when they visit the Canadiens in Montreal.

The Canucks will be back in action on Wednesday, hosting the Edmonton Oilers.

NOTES: Pettersson missed the rematch with a knee injury he suffered in a game against Montreal earlier this month. … Panthers centre Nick Bjugstad returned to the lineup Sunday after missing 16 games with an upper-body injury.