The general manager with the Stanley Cup rings was supposed to come in here and fix things. And maybe someday he will. But all we have at this point is the here and now.

And Botterill’s team – which, it should be noted, features nine players he’s put on the roster since last May – is a disaster.

So given his first chance to wipe out some of the atrocities we’ve seen for the last 4 1/2 months, the GM basically admitted his team is an NHL laughingstock and punted.

He said got one legitimate offer for Evander Kane, a stunningly low one from the San Jose Sharks, and was painted so far in the corner he had to take it. He apparently couldn’t get a bag of pucks for the likes of Benoit Pouliot or Josh Gorges, had no takers in a tight market for either of his goalies and didn’t execute any sort of hockey trade.

It’s to the point where you wondered if this is some sort of stealth tank.

Murray was open about it, getting rid of everybody in those bizarre weeks in 2015. Botterill just stood pat with the most boring, uninteresting team in franchise history, promised to make a lot of moves in the spring and summer and asked us all to believe it.

Newsflash: There were six first-round picks moved ahead of the deadline, including four on Monday. The Sabres got a second-rounder from San Jose for Kane, which becomes a first-rounder in 2019 – as in 16 months from now – only in the event Kane re-signs with the Sharks or the boys in teal win the first Stanley Cup in their 27-year history.

Botterill insisted it was a “difficult market” for rentals. Even though St. Louis got a first-rounder from Winnipeg for Paul Stastny, who is six years older and hasn’t scored 20 goals in a season since 2014.

What the Sabres got for Kane is pennies on the dollar. A second-round pick in 2019 might turn into an NHL player in, oh, 2022 … If they’re lucky. A third- or fourth-round pick. Danny O’Regan, a middling 24-year-old. How many other Boston University buddies of Eichel can this franchise add?

Kane has three straight 20-goal seasons. In a 12-month period that ended in mid-December, he was second in NHL to Toronto stud Auston Matthews in even-strength goals. If this is all he’s worth as a rental, every NHL GM must view him as the biggest pariah in the league.

Maybe his own one does, too. Botterill, remember, didn’t give up the king’s ransom to get him from Winnipeg three years ago. Murray did. Just exactly where is it in the rulebook for front offices that every pending unrestricted free agent must be traded?

Botterill gave himself no leverage by not even giving the appearance he was interested in retaining Kane. And he overplayed his hand waiting until an hour before the deadline. The season has been shot since before Thanksgiving. What about dealing Kane weeks ago? The rental market is tough until the deadline because so many teams don’t know their position as a buyer or seller, but this was hardly maximizing the biggest asset Botterill had.

His No. 1 job for the entire season was to get a good package for Kane. He failed. 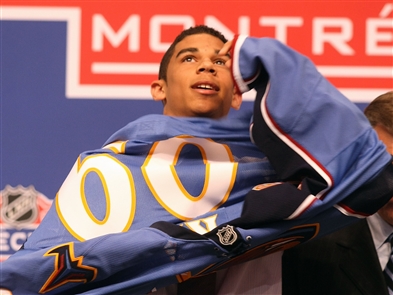 Why was there no serious thought given to keeping perhaps the best pure goal scorer on a team desperate for offense? Botterill denies the decision to move Kane comes from ownership, and that it was made solely by him and his management team. But it’s well known Terry and Kim Pegula never forgave Kane for the 2:45 a.m. incident at a Chippewa Street bar the night before the 2016 NHL Draft.

“The bottom line is we’re working in a salary cap world,” Botterill said. “You understand what we have on the books for some contracts that are still here, you also understand what contracts are coming into the mix starting next year. You also have seen our mix on the ice and I’m not putting the blame all on Evander Kane. There’s a lot of blame to go around. Coaching staff, management, players. We have to be better in certain situations. The bottom line is the mix that we have right now is not working. So we had to make adjustments.”

Adjustments. It was some clear corporate speak. Repeating what I’ve said several times: Botterill better adjust 10 or 12 guys out of this dressing room by next September. He seems angry enough to. Asked about that no-show a couple weeks back against Los Angeles when he slammed the door and stormed out of his press box booth and you could still see the steam coming from his ears. Good.

Sabres add O’Regan, an ex-linemate of Eichel and AHL Rookie of the Year

San Jose is a good landing spot for Kane. There were simply no veterans in the Buffalo room to keep him on the straight and narrow. In the Shark Tank – and isn’t it ironic he comes from Buffalo and gets to go play in a rink call the Tank? – he will have to answer to the likes of Joe Pavelski, Joe Thornton, Brent Burns and Logan Couture. Not to mention a head coach in Peter DeBoer who has been to two Cup finals. The betting here is that Kane minds his Ps and Qs. He wants to play in the playoffs and he wants to get paid this summer. 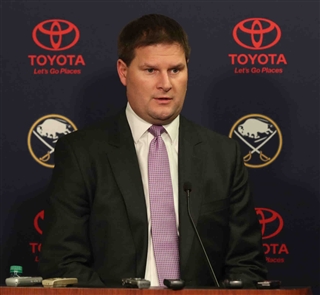 “Evander is one of the top young power forwards in the NHL. He is a dynamic player who has a unique combination of size, grit, speed and goal-scoring ability,” said Sharks GM Doug Wilson. “We wanted to add a player that could help this team but also was just hitting his prime.”

The Sabres’ inaction belies that analysis and they clearly feel Kane is a bad guy who can’t be corralled in their leaderless dressing room. Fair enough. The stories of Kane enjoying the Buffalo nightlife have never cooled during his three years here, and teammates and coaches often scoffed at the way he strode into the arena for games and practices well after most players, simply suited up and headed on the ice.

Kane has lots of other interests, and many insiders felt he simply banked on his huge athletic ability to carry him through and never worked all that hard on his craft. Now that he’s gone, the company line is that the locker room will be better. We might even start to hear it was all Evander’s fault. But among their many needs now, what’s high on Botterill’s list? A fast-skating, powerful scoring winger on the left side, preferably one to play with Eichel.

Hmmm. They just sent one out the door and didn’t get very much for him in return. The Pegulas have shown they don’t have a lot of patience when it comes to GMs. Botterill isn’t in Pittsburgh anymore.