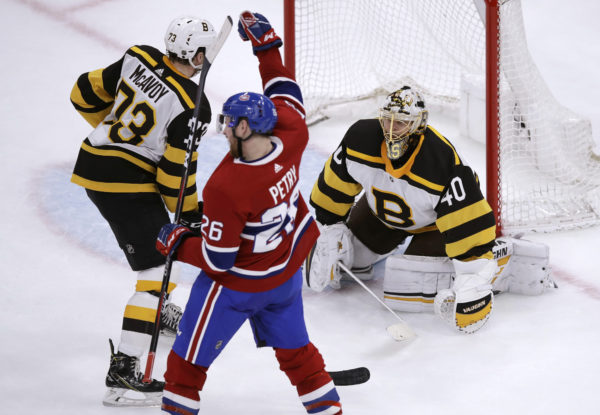 BOSTON — Somewhere along the way, Canadiens defenseman Jeff Petry must have learned a little baseball, too.

The son of major league pitcher Dan Petry scored the game-winner just 15 seconds into overtime on Monday night, batting the puck out of the air and past Tuukka Rask to give Montreal a 3-2 victory over the Boston Bruins.

“That bloodline of Jeff Petry in the baseball world,” Canadiens coach Claude Julien said with a smile, “he showed his talent on that goal.”

Carey Price stopped 41 shots for the Canadiens, but he allowed David Krejci’s 6-on-4 goal with 38 seconds left in regulation to send the game into overtime. Once there, Montreal didn’t need a lot of time to regain the lead.

After winning the opening faceoff, the Canadiens gathered in their own zone before Max Domi carried the puck over the blue line and then waited for Petry to get into position in front of the Boston net. Domi’s shot went off Rask’s glove and into the air, where Petry swatted it into the net with his backhand.

“We lost the draw and then all of a sudden, we never touch it,” Boston coach Bruce Cassidy said.

Rask made 19 saves but lost for the first time in his last six starts. A year after the Bruins swept their Original Six rivals in the season series — winning six matchups in a row in all — the Canadiens managed to split their four meetings this season.

“It’s our No. 1 rival, lot of history here,” Byron said. “And every time you come in this building and win, it’s huge.”

Brad Marchand scored for Boston, giving the Bruins a 1-0 lead about six minutes into the game. Julien said the turning point was when Nicolas Deslauriers and Boston’s Kevan Miller dropped their gloves late in the first period.

Although it was the Canadiens defenseman who lost his helmet and wound up on the bottom when the two went to the ice, Julien said it gave his team a boost.

“I think it helped,” Julien said. “We scored afterward, and I think when you look at the kind of fight it was, there’s no doubt it gave us a spark. … It’s the kind of thing we don’t see much anymore, but I think the players and the coaches appreciated what he did.”

Gallagher tied it about two minutes later. Late in the second, with Victor Mete off for hooking, Byron outskated Boston’s Patrice Bergeron to a loose puck at the blue line and went in on the net, switching to his backhand before flipping it past Rask’s glove for the go-ahead goal.

It stayed that way until Montreal’s Michael Chaput was called for delay of game for shooting the puck over the glass with 2:05 left. Rask came off 30 seconds later, and the Bruins worked their two-man advantage and got the puck to Krejci, who wristed it into the net to assure Boston one point.

“We got one. Krejci got a big goal there late to get us that point,” Marchand said. “Would have been nice to get the second with Toronto losing tonight.”

David Pastrnak played in his 300th NHL game. … The Bruins wore the sweaters they made for the Winter Classic, at Notre Dame Stadium against the Chicago Blackhawks. … Bergeron has 13 points in 11 games since he missed 16 with a rib injury. … Canadiens coach Claude Julien improved to 2-6 against the team he led to the 2011 Stanley Cup championship. … Byron, who hadn’t scored a point in six games, scored his first goal since back-to-back game-winners on Dec. 20 and 22.