New York Rangers: A defensive horrorshow in a 7-5 loss to the Blue Jackets – FanSided 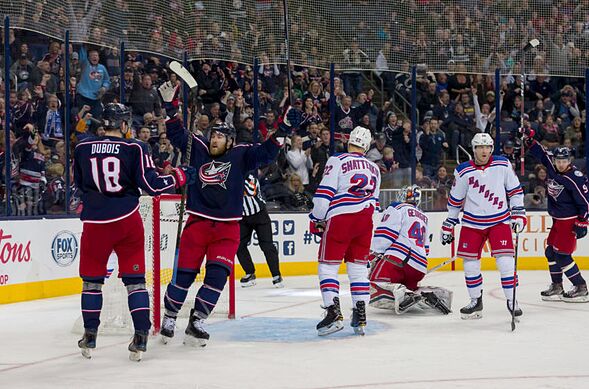 COLUMBUS, OH – JANUARY 13: Columbus Blue Jackets defenseman David Savard (58) celebrates after scoring a goal in a game between the Columbus Blue Jackets and the New York Rangers on January 13, 2019 at Nationwide Arena in Columbus, OH. (Photo by Adam Lacy/Icon Sportswire via Getty Images)

The New York  Rangers went into Columbus with high hopes and for almost two periods, they held their own.  Then the superior talent of the Blue Jackets took over and it became a dispiriting 7-5 loss.

The 2018-19 New York Rangers suffer from a lack of talent. When they play a team like Columbus they can compete, but eventually the team with more ability takes over.  That’s what happened Sunday.

Then, with two seconds left in the second period, Nick Foligno deflected a shot past Alexandar Georgiev for a 5-3 lead and suddenly the game was out of reach.

You knew the Rangers would be in trouble when both Adam McQuaid and Fredrik Claesson were unable to play.  Neal Pionk returned from an injury and Brendan Smith came off the bench, but the Rangers were facing a team full of firepower without two of their better defensive defensemen.

The result, seven goals against. True, the Rangers never gave up and actually made it a one-goal 6-5 game with 3:12 left, but then they allowed a backbreaking goal by Nick Foligno and it was over.

Alexandar Georgiev got his second straight start and was strafed for 40 shots. He made a lot of great stops, but he also could have stopped some of the Columbus goals. The chorus of Lundqvist haters grew louder after the first Islander game, but today was proof that this is not a Henrik Lundqvist problem.  That’s not to say that the result would have been different or Columbus would have scored fewer goals with Lundqvist in net, it is just that when your team defends like that, no one can prevent the onslaught.

The Rangers were god awful on faceoffs. They won 21 of 68 draws  (31%) including only four of 25 in their own zone. That kind of performance and you cannot win games. No Ranger center was better than 37.5% on draws.  Just awful.

The Rangers had taken five penalties by the 11 minute mark of the second period. They killed them all, but they couldn’t get any kind of offensive rhythm going.

The Rangers had three power plays and couldn’t score. For the third straight game they had a two man advantage, this one for 1:09 and they couldn’t score, getting two shots.

The final score was deceptive.  Sergei Bobrovsky was fighting the puck all night and both teams were sloppy in their own zones.  The Blue Jackets’ size and skill prevailed.

David Quinn was livid after the game.  I was hoping that the full postgame interview video would be posted somewhere, but so far it hasn’t.  Here is a transcript of the first half and video of the remainder:

“They just won every one on one battle. Every time they went into the corner, they came out with the puck…our guys on the flanks didn’t help at all, that’s a team that competes hard on pucks.  They test your mettle and we failed miserably tonight, miserably.  Our lack of determination on one on one battles,fishing for pucks, you do that in this league and that’s what happens to you, you get your asses handed to you.”

He was asked if he would throw the video away and forget about the game.

“No, we’re gonna watch this and we’re gonna learn from this because we have zero chance if we have 20 guys in uniform not willing to compete over pucks and get into people and have a little bit of snarl to your game.”

Here’s the rest on video. Watch it to the end:

“I don’t think we’re physical enough. We don’t have enough grit when it comes to 1-on-1 battles.” – David Quinn after #NYR loss to Jackets pic.twitter.com/hbB2wlOJ0y