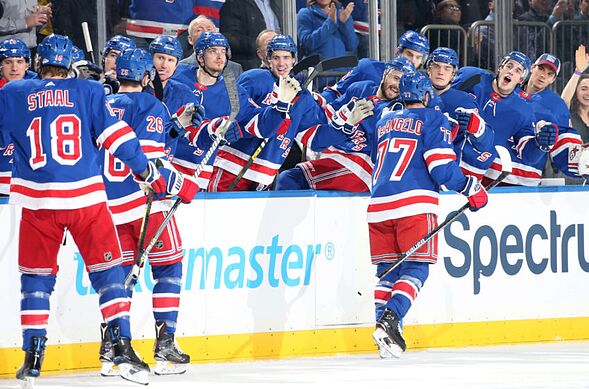 NEW YORK, NY – JANUARY 15: Tony DeAngelo #77 of the New York Rangers celebrates after scoring a goal in the first period against the Carolina Hurricanes at Madison Square Garden on January 15, 2019 in New York City. (Photo by Jared Silber/NHLI via Getty Images)

The New York Rangers played their most dominant game in weeks for a 6-2 win as they defeated the Carolina Hurricanes for the 16th straight time at Madison Square Garden.

They listened.  New York Rangers coach David Quinn lowered the boom on his team Sunday night and made it clear what his expectations were.  Then, they promoted Ryan Lindgren from Hartford, sending another message, about NHL mortality. The team listened and played a game where they won puck battles, drove to the net, took shots and did better on faceoffs.  The result was a dominant win over a good hockey team.

It was a comeback night for a number of Blueshirts and it started in the first period. The Rangers came out flying and Immediately started winning few puck battles.  They got on the scoreboard when Tony DeAngelo scored just 1:16 into the game.
It came off a faceoff win by Boo Nieves.  Jimmy Vesey got the puck to DeAngelo at the blueline and he didn’t hesitate, taking the shot and it eluded Curtis McElhinney.  A quick goal was just what the Rangers needed and they continued the physical play.

They gave away the lead eight minutes later when Brett Howden couldn’t control the puck and it was stolen by Saku Maenalanen who put it past Lundqvist for an unassisted tally.

As deflating as the goal was, the Blueshirts kept the pressure up and when Greg McKegg tripped Vlad Namestnikov, they went on their first powerplay. One minute in, it was Mika Zibanejad’s turn.

It was a set play with Kevin Shattenkirk shooting the puck into the Carolina zone from behind the red line.  Chris Kreider used his speed to get to the puck and he made a great pass to Zibanejad.  The Rangers had been called for icing on an identical play earlier.

Zibanejad added his second goal on a marvelous pass from behind the net by Mats Zuccarello.

They had to kill a soft  slashing penalty against Sebastian Aho and  did so easily.  So the Rangers ended the first period with a 3-1 lead.  Shots were even 13-13, but they won 52% of the faceoffs.  The outhit Carolina 13-7 and blocked 11 shots to Carolina’s five.  It was a hard working period for the Rangers.

The only scoring in the second period was a power play goal by Pavel Buchnevich at 3:41. .

It was outstanding passing from Zuccarello and ZIbanejad to Buchnevich who was in front of the net.   The penalty was a hooking penalty on Andrei Svechnikov on Boo Nieves who drew the penalty through hard work.

The Rangers controlled play, not allowing a Carolina shot on goal until the 9:23 mark.  The Hurricanes came on in the second half of the period, even outshooting the Rangers 11-8.   Lundqvist made the save of the game with just under three minutes left in the period.

It was robbery as he stretch to stop a shot by a wide open Warren Foegele. It was vintage Lundqvist and key as it kept it a three goal game.

In the third period the Rangers backed off their physical game a bit.  Filip Chytil drew a penalty on a rush and the power play added another goal as Buchnevich scored his second of the game.

It was a two on one that became a four on two when DeAngelo streaked into the zone and got to the loose puck and put it past McElhinney.  After that it was garbage time and the Rangers took home the two points and a much needed win, 6-2.