New York Rangers: Sneaking past the Blackhawks 4-3 by Sam Prevot

New York Rangers: The core of the future is a few pieces light by Nicholas Zararis 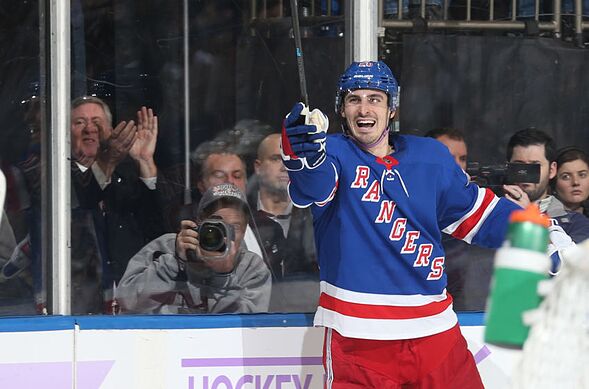 NEW YORK, NY – NOVEMBER 26: Chris Kreider #20 of the New York Rangers reacts after scoring a goal in the third period against the Ottawa Senators at Madison Square Garden on November 26, 2018 in New York City. (Photo by Jared Silber/NHLI via Getty Images)

No matter the amount of success this young New York Rangers team finds, it must be said that this is a rebuilding year. As such, the case for moving on from any and all movable assets needs assessment. While much of the chatter seems to be surrounding forwards Mats Zuccarello and Jesper Fast, I believe that there is a case to be made for Chris Kreider.

The New York Rangers are in the midst of a rebuilding season under a brand new head coach. The team isn’t playing well as currently constituted, nor is it supposed to. This season is a learning year for both the team’s young coach and young players.

Just as described by the upper management in a letter to the fans last season, the Rangers need to continue this youth movement. And while it hurts to do so, that includes moving on from some of the team’s better players, especially those with contracts that expire in the next two seasons.

Much chatter around the league insiders has surrounded Kevin Hayes,  Mats Zuccarello and Jesper Fast. However, forward Chris Kreider checks all the boxes of good trade bait. He’s on the better side of 30, he has a good goal scoring record, and he would be more than just a rental player.

For one, Kreider is still very much in his prime. He turns 28 this coming April. Even though he’s only 27, he already has seven years of professional experience. For a playoff contender, Kreider is a playoff veteran of 77 games.

Kreider is known for a few different aspects of the game. First, his speed is well documented, particularly for a player of his stature. Second, his goal scoring record speaks for itself, as he has potted at least 20 goals every year since 2014, excluding his injury shortened 2017-2018 season. Finally, his 200-foot game has progressed rapidly over the last few seasons, a skill set that is very important for a playoff contender. He currently has 22 goals and 15 assists through 47 games, numbers  that project to career highs in both categories.

Kreider’s contract also makes him a good trade target for the league’s contenders. Most of the NHL’s better teams don’t have much in the way of cap space. Luckily, Kreider is signed for the low low price of $4.625 million against the cap. Plus, the Rangers have the option to retain up to 50% of a contract this season.

What could the return for Kreider be?

I’m not sure what the market for a player like Kreider is looking like right now, but if you look at recent trades for players like him, you can start to formulate an idea of a good return.

The first trade that came to mind is the Evander Kane from Buffalo to San Jose. The 27-year-old forward was seen as a rental before he signed his long-term extension with the Sharks. After scoring 20 goals and 20 assists with the Sabres prior to the trade, Kane garnered a decent prospect, a first round draft choice, and a conditional fourth round pick.

On the other hand, Kreider could go for something closer to what Brayden Schenn did, that is, if the Rangers can find another team to fleece. After the 2016-17 season, Schenn was dealt to the St. Louis Blues for Jori Lehtera, a perennial bottom six forward, and two first round picks. The cases are slightly different though. Schenn was only 25 at the time, and he had three years remaining on an affordable contract following a strong, 55-point season.

If Kreider is dealt, his package will likely end up being something between Kane’s trade and the return the Rangers got for Michael Grabner. Grabner pulled defense prospect Yegor Rykov, and a second round pick.

With the way that this season is going for the Rangers, if they receive an offer anywhere close to what the Sabres got for Kane, I think they should jump at the opportunity. The Rangers are nowhere near ready to compete again, and moving Kreider could help accelerate the rebuild with an infusion of prospects and draft picks.