New York Rangers: Finishing among the bottom three is imperative by Steve Paulus 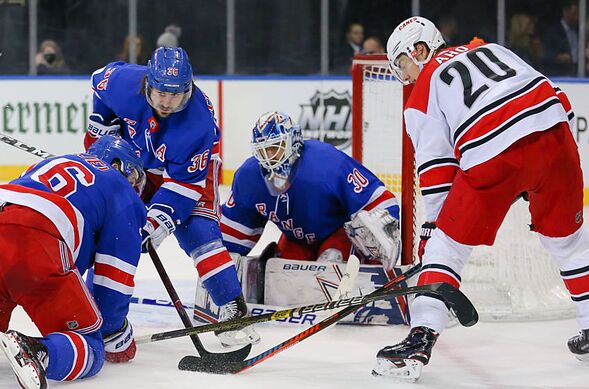 A big New York Rangers win over Carolina didn’t do much for their NHL Entry Draft lottery aspirations.  The Blueshirts moved up a couple places in the standings, but the good news is that at least some of their lottery rivals also picked up points.

As far as the playoffs go, the Rangers win meant that they picked up a point in the playoff race and are now 11 points out of the second wild card slot and third place in the Metropolitan Division.

With the win over Carolina, the Ranger have 45 points and are now ninth from the bottom of the NHL standings, tied in points with St. Louis.  They moved ahead of idle Arizona and New Jersey. They are six points ahead of last overall Ottawa.

On the good news front, the Red Wings  (43 points)  beat Anaheim (their losing streak is now 12 games) and kept pace with the Rangers.

The Kings and the Blues both lost, but did it in overtime so they added a point. That kept St. Louis tied with the Rangers and Los Angeles has 40 points, one more than NHL worst Ottawa Senators.

Losers were Florida and the Devils, both teams now below the Rangers in the standings.

This is what happens when you win games and the win against Carolina halted a slide in the lottery standings (a bad thing when it comes to Jack Hughes).

Five games on the schedule  Wednesday and they all involve teams in the lottery hunt.  It’s important for these teams to win when the Rangers are off and especially when the Blueshirts win.

Avalanche @ Senators – Colorado has won only two out of their last ten. Unfortunately, so has Ottawa.  Root for Ottawa to move out of the cellar with a home win vs. Colorado.

Bruins @ Flyers – Philadelphia is another team with only two wins in ten games and they have a touch home game vs. the Bruins.  A Flyers win would be helpful.

Sharks @ Coyotes – Arizona sits two points worse than the Rangers in one less game.  San Jose has been red hot so the Yotes face a real challenge.

Oilers @ Canucks – Both of these teams are in the lottery hunt, both with 47 points, two more than the Rangers.  Pick ’em.

Sabres @ Flames – Buffalo is in a mini tailspin. They’ve dropped out of the playoff picture with only three wins in their last ten. Now they get to play the second best team in the NHL on their home ice.  Good luck Buffalo.  They are still seven points up on the Rangers, so a Sabres win isn’t vital.

Next: The Rangers listen to Quinn and win

The Rangers have a key lottery match up on Thursday vs. the Chicago Blackhawks, one of the teams the Rangers must finish below.