New York Rangers: What three straight wins does to the lottery standings – FanSided

New York Rangers: Three things to watch for against the Boston Bruins by Nicholas Zararis 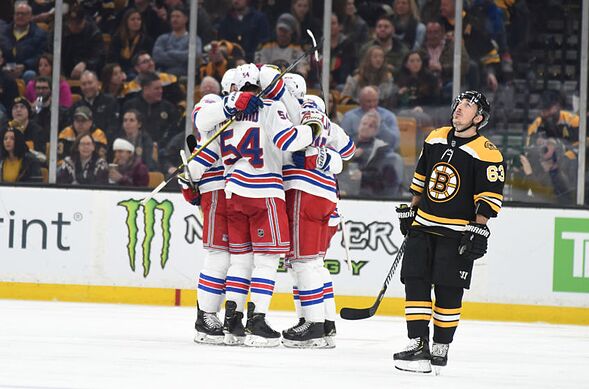 BOSTON, MA – JANUARY 19: The New York Rangers celebrate a goal against the Boston Bruins at the TD Garden on January 19, 2019 in Boston, Massachusetts. (Photo by Steve Babineau/NHLI via Getty Images)

The New York Rangers have won three in a row for the third time this season.  A streak like that could wreak havoc on the Ranger’s entry draft lottery hopes, but once again, upsets were on the table and the Rangers did okay.

On the playoff front, the Blueshirts are now nine points out of the wild card with 49 points to Pittsburgh’s 58 points.  They were helped by the Penguins loss to the Vegas Golden Knights.  With the win, the Rangers are now eight points ahead of Chicago, the worst team in the league.

On the good news front, four lottery teams won and kept pace with New York. On the negative side, four lottery teams lost and fell further behind the Rangers.  The  Blueshirts themselves remain 10th worst in the league, but they have moved into a tie point-wise with Edmonton and Carolina.

The Ducks beat the Devils 3-2 and moved a little closer to getting back into the playoff picture.  Six points now separate the Rangers and New Jersey and the gap is widening.

The Flyers did the unexpected and defeated the Montreal Canadiens 5-2 at the Bell Centre.  The Flyers remain five points worse than the Rangers, but are distancing themselves from last place.

Florida beat the Predators on the road 4-2.  With the win, the Panthers stay three points worse than the Rangers.

In a meeting between two lottery teams, the Blues prevailed over the Senators 3-2.  St. Louis remains two points worse than the Rangers while Ottawa is now six points worse.

The two other lottery teams that lost  were the Kings (7-1 to Colorado) and the Devils.

The standings (Worst is first)

Five games in the NHL on Sunday and they all involve lottery teams.

Capitals @ Blackhawks – The Hawks have the worst record in the NHL.  Root for them to upset the visiting Capitals.

Ducks @ Islanders – Anaheim has now won two in a row after losing 12 consecutive games.  A win and they could be back in the playoff picture.  Root for the Ducks to win.

Red Wings @ Canucks  – Detroit has slipped six points worse than the Rangers and the Canucks are only one point better.  So, root for Detroit  to win in overtime.

Hurricanes @ Oilers – Carolina, Edmonton and the Rangers all have 49 points.  Pick’em to win, but get to overtime please.

Next: The Rangers core for the future is a few pieces light.