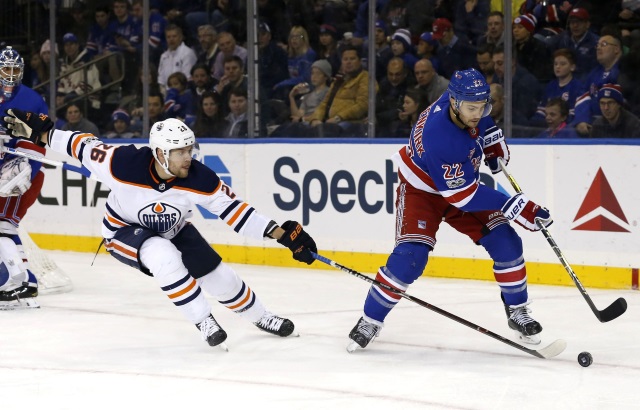 Shattenkirk trying not to think about the trade deadline

Larry Brooks of the NY Post: It hasn’t been a great year and a half of New York Rangers defenseman Kevin Shattenkirk.

He feels he’s played better of late, which could help increase potential trade interest around the league.

“I haven’t thought about the possibility too much, but I also don’t want to say that I’m numb to it,” said Shattenkirk, who was traded as a deadline rental from St. Louis to Washington two years ago. “Because of my past, I’m always aware of it, but I’m not worried about it, either.

“I have enough to worry about on my own plate.”

Shattenkirk has two years left on his deal at a $6.65 million salary cap hit with a modified no-trade clause – a 10-team no-trade list that was submitted last July.

“It’s different than last time, I’m not a rental, but even then I was surprised that I went to Washington,” Shattenkirk said. “I know what this time of year is like, but it’s not uppermost on my mind. I’m not thinking about my game in correlation with the trade deadline.”

Chris Nichols of Nichols on Hockey: Elliotte Friedman was on Sportsnet 960 and was talking about the Edmonton Oilers, Jesse Puljujarvi and their 2019 first-round pick as they attempt to make the playoffs.

Friedman has heard they are interested in trading Puljujarvi, that they aren’t, and that they don’t want to if they don’t have too.

“One of the things that happens is teams say, ‘We’re not shopping the guy,’ but that usually means that they’re getting calls and they’ll listen, depending on what it is.”

There are some within the Oilers who don’t want to give up on him too quickly, but they do want to make the playoffs this year.

“They’ll try some other things. They’ve got a first-rounder. Maybe they’ll think of moving that with some protection on for a really high pick. But teams are going to ask them about Puljujarvi, and we’ll see what they decide to do.”