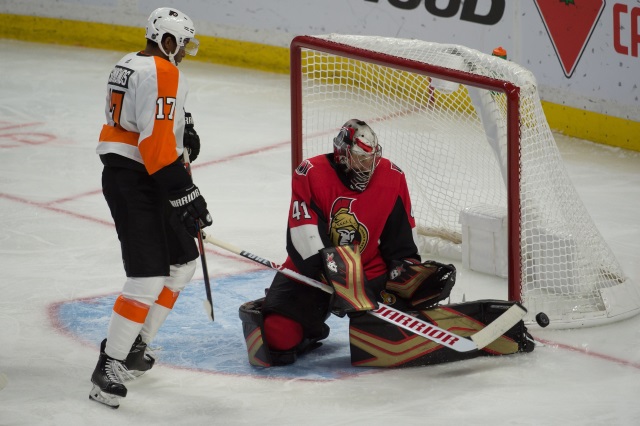 Flyers and Senators scouting each other

Tony Androckitis: Is there something going on between the Philadelphia Flyers and the Ottawa Senators.

The Flyers had a scout at the Carolina Hurricanes and Ottawa Senators game last night.

The Senators had two scouts at the Flyers games and one at their AHL.

Flyers may be looking to make a big move

Chris Nichols of Nichols on Hockey: Elliotte Friedman on Sportsnet 960 was asked about the Philadelphia Flyers. GM Chuck Fletcher has been evaluating his team and get the sense that they want to make a big move.

“I think Simmonds is going to be traded. I think there’s a few teams looking at him. But as for the big moves, I’m not sure if those will happen now or they’ll take a little bit longer.

“They’re not trading Giroux. They’re probably not trading a few of their young players. I do think there were teams who were interested in Nolan Patrick and were curious to see if they would be as married to him without Hextall there, but I think Fletcher is careful to resist that.”

Friedman adds that some of their bigger moves could happen in the offseason.

Brian Heyman of Newsday: New York Islanders forward Jordan Eberle is in the last year of his six-year, $6 million per season contract.

He admits that he’s thinking about it, but know he can’t control it.

“It’s on my mind, but it’s out of your control, really,” said Eberle, whose linemates, Anders Lee and Brock Nelson, have expiring deals, too. “… It’s not up to me. The best I can do is try and play well and keep helping us try and win hockey games.

“It’s been fun being a part of this. We’re a good team. We’re surging for first place right now. We feel we have the group to do it. So I’ve enjoyed it.”