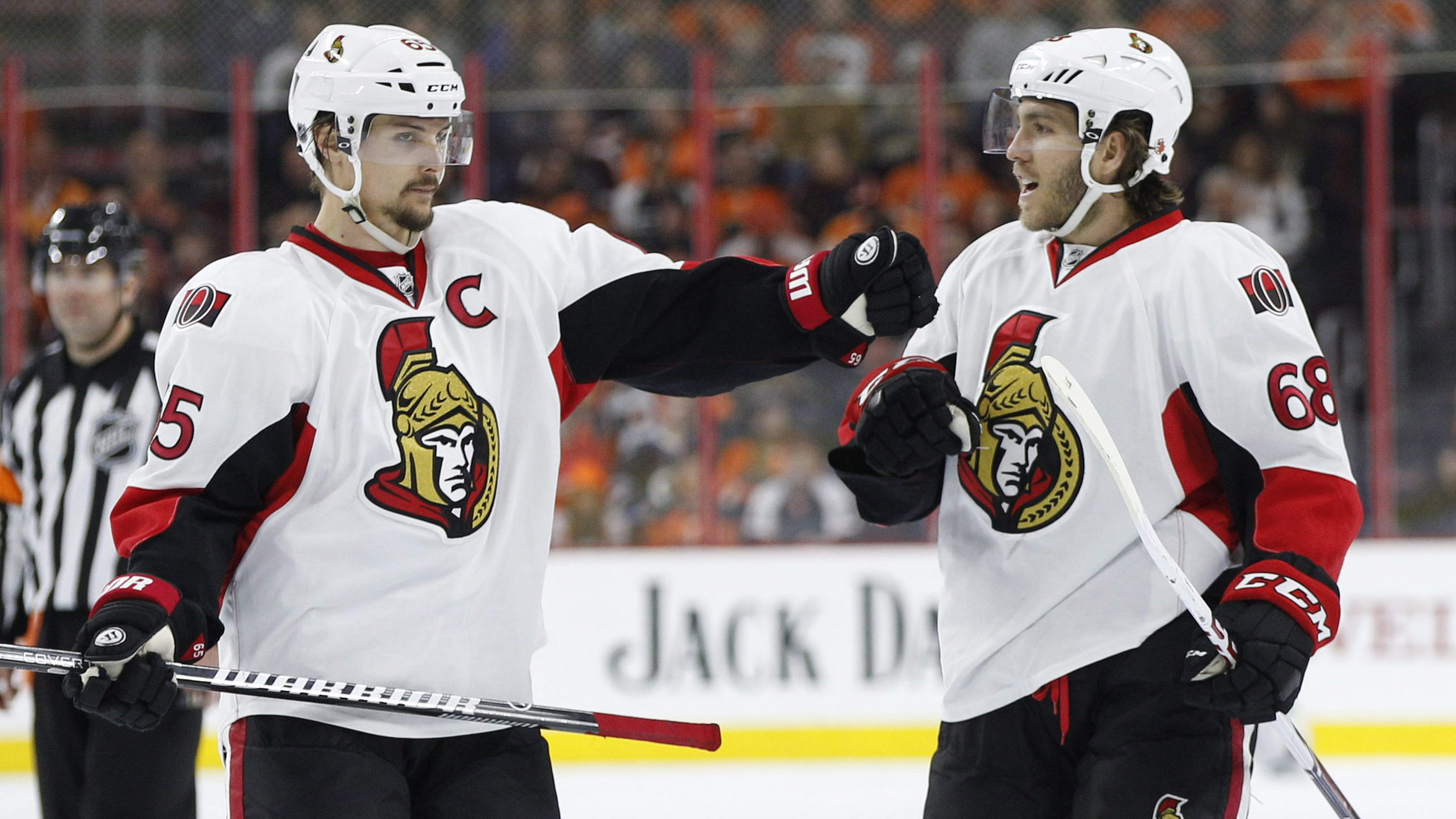 The NHL’s trade deadline is less than a week away, and though we’re still waiting for our first major “hockey deal,” the rumour mill is full of goodies. How many of these players move remains to be seen, but it may only take one trade for the dam to break on a rush of other transactions.

Here are the latest notes from around the NHL ahead of the Feb. 26 trade deadline.

It’s no secret that the Pittsburgh Penguins will be buyers at the trade deadline in an effort to be the first team to three-peat since the New York Islanders won four in a row at the start of the 1980s.

“Based on what we’re trying to do here and the window we have, we’re certainly willing to put out some futures there,” general manager Jim Rutherford said on Prime Time Sports last week. “At some point in time down the road four or five years from now there will have to be a rebuild of some kind in Pittsburgh, but with the players we have now and the opportunity we feel we have to win over the next few years, we’re going to do what we have to do to make the deal to add the pieces that give us the best chance.”

The Penguins have mostly been involved in rumours around a centreman for the third line, whether it be Derick Brassard in Ottawa or a more defensive option in Tomas Plekanec from Montreal. But according to Jason Mackey of the Pittsburgh Post-Gazette, the Penguins may also be in on speedy winger Michael Grabner.

The Rangers forward has scored 25 goals this season, 24 of which have come at even strength, which is fourth-most in the NHL. In fact, Grabner’s 50 even-strength goals since the start of last season is tied with Vladimir Tarasenko, and trails only Auston Matthews for the league-wide lead.

At 30 years old, Grabner is slated to become a UFA this summer, but has a very team friendly $1.65 cap hit. An acquiring team would only need approximately $363,000 in cap room to acquire Grabner. According to CapFriendly, the Penguins currently have $381,505 in space.

Here’s a list of some of the higher profile players who are rumored to be available in trade, & the cap space required should a club want to acquire either of those players at the Trade Deadline: pic.twitter.com/NlX19ZelV9

Although the Rangers have announced their intention to sell for younger players and picks, it’s not clear if they would be open to trading inside the Metropolitan Division.

The Penguins are also reportedly open to moving two defencemen: Ian Cole and Matt Hunwick. Cole has been part of the rumour mill for months, but those rumours have softened lately. Now, Hunwick’s name is being raised the most in Pittsburgh as a potential player who could be moved.

“The one guy that is (available) and it’s been noted Jimmy Rutherford has let teams know, is Matt Hunwick,” Nick Kypreos reported on Hockey Night in Canada. “They have to shed some salary moving forward so they can add that third centremen I’m sure they’re looking for.”

Hunwick, 32, makes $2.25 million against the salary cap and is signed for another two seasons beyond this one.

With one season left on his contract after 2017-18 before becoming UFA eligible, Erik Karlsson‘s future with the Ottawa Senators has been called into question. While this still feels like a trade more likely to go down in the summer (perhaps around the draft) if the Senators do indeed elect to move on from their franchise defenceman, there are rumblings it could happen by next week’s deadline.

Hearing that several teams will be pitching Sens this week on Erik Karlsson. Taking on Ryan contract expected to be part of the ask.

“I keep getting told the same thing and that is don’t be surprised if Erik Karlsson is traded,” Sportsnet’s Nick Kypreos said on Saturday’s Headlines segment on Hockey Night in Canada.

“They want to get the message out he’s unavailable but as one general manager told me yesterday if you’re not prepared to make him the highest paid player, and there is a belief he could get there, then why would you not explore the maximum value on his return?”

The thinking goes that if Ottawa is thinking of moving on, Karlsson’s trade value will be higher at this deadline than at any other point before his contract runs out. That’s because if a team can acquire him by Feb. 26, they would be taking two Cup runs with the two-time Norris winner, rather than bringing him in as a one-season rental.

“When I go to market, I’m going to get what I’m worth, and it’s going to be no less, no matter where I’m going,” Karlsson told the Ottawa Sun earlier this season. This was in response to comments made by Drew Doughty, who said he would also be looking for top dollar and would talk with Karlsson to work out what each is looking for. Doughty will also be UFA eligible in 2019.

ANYONE WILLING TO PONY UP TO ACQUIRE CHRIS TANEV?

Most of the defencemen who are potentially available around the NHL’s trade deadline are left shooters, so anyone craving a righty could target 28-year-old Chris Tanev from Vancouver. But if a team goes that route, they will have to pay up for a player the Canucks would reportedly like to keep.

“What I’ve been told is the Canucks have told teams, including I believe Toronto, if you’re serious it’s going to take a special offer to do this,” Elliotte Friedman reported on Hockey Night in Canada. “I think the Canucks realize still that even though they’re rebuilding you want to give your young players a chance and you’ve got to be serious, really serious, if you want to get Tanev out.”

Tanev averages 19:46 of ice time per game, the third-most of any Canucks blue-liner. With 57.7 per cent of his zone starts coming in the defensive end, per hockey-reference, and a team-high average of 3:01 per game on the PK, Tanev is the primary defensive option for Vancouver.

Aside from the high asking price, complicating Tanev’s availability further is the fact he’s out of the lineup with a fractured leg and may not return for another three-to-four weeks.

Tanev was hurt Feb 8th in TB, #Canucks said he would be out a week. Hearing it will be longer than 1st expected, maybe another 3-4 weeks. Fracture of the leg.

HOW BUSY WILL THE BLACKHAWKS BE IN THE SELLERS’ MARKET?

On the one hand, the Chicago Blackhawks are well outside of the playoff picture and suited to be a trade deadline seller. On the other, their team is very top heavy in how it’s constructed against the cap and we shouldn’t expect any of their biggest money makers (Toews, Kane, Seabrook, Keith) to be moved. And some of their cheaper players who have value, such as Alex DeBrincat and Jordan Schmaltz, need to be key contributors next year if the ‘Hawks hope to bounce back.

So who could the team move by the deadline?

The Columbus Blue Jackets are one of the teams reportedly shopping for help at the centre position and have been connected to a couple of their former players, including Artem Anisimov from the ‘Hawks.

“It’s been known Columbus has been looking for a centre,” Friedman noted. “We’ve mentioned earlier they’ve taken a look at one of their former players Derick Brassard, who’s in Ottawa. I believe they’ve also checked in on another one of their former players, Artem Anisimov of Chicago, who has played with Panarin before, but I believe the word is Chicago has told them they want to keep him.”

Artem Anisimov said he hadn’t heard about reports that teams are inquiring about his availability: “Just heard that first time from you. I don’t read the news and I don’t know what’s going on in the world. It’s easier to just focus on hockey.”

ARE THE ST. LOUIS BLUES THE FAVOURITE TO LAND MIKE HOFFMAN?

It’s no secret the Blues are looking for someone who can score in a top-six role, whether it be a centre or a winger. Since Jan. 1, St Louis is averaging 2.68 goals per game, making them one of the NHL’s lowest-scoring teams in that stretch. They’ve still managed a 10-7-2 record, but the Dallas Stars have now passed them for third in the Central Division (tied in points, Dallas with a game in hand) and the Blues are only three points away from dropping out of a playoff spot altogether.

According to Lou Korac, Blues writer for NHL.com, St. Louis is “engaged in serious discussion” with Ottawa for either Brassard or Hoffman, though will not work a package deal for both.

Korac noted that Vladimir Sobotka and Patrik Berglund are two players that could be in the mix going back to Ottawa. Another, 22-year-old Robbi Fabbri, is out for the season with a torn ACL, but Korac cited reports that the Senators had asked to look at Fabbri’s medical records.

Hoffman has a modified no-trade clause, wherein he can submit a list of 10 teams to which he will not accept a trade. On Saturday’s Headlines segment, it was reported the Jets were interested in Hoffman, though they were one of the 10 teams he would not go to. Should the Blues want to execute a trade to bring in Hoffman, he would need to be open to going there first.