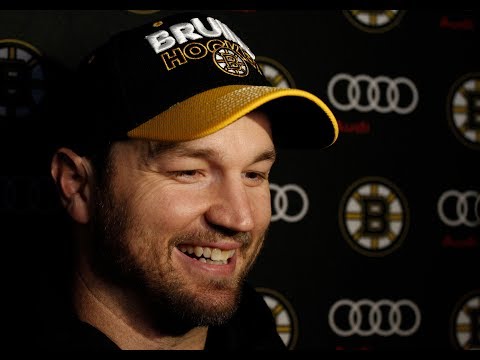 BRIGHTON, MASS. — Rick Nash has already played one game in a Boston Bruins uniform. He was traded from the New York Rangers on Sunday morning, before he picked up his jersey and played in Buffalo in the same day.

Tuesday morning, he had his first chance to skate with at the team’s practice facility, the Warrior Ice Arena, ahead of his home debut against the Carolina Hurricanes. It has been just a few days since the move, but Nash has already enjoyed the experience with his new team.

“It’s unbelievable,” Nash said. “I’m so happy to be here in Boston and have a chance to win. Everything you hear, it’s a great city to live in, a great organization and I’m happy to bring my family here.”

Nash has 18 goals and 10 assists this season, and will be looking to add to a seventh ranked Bruins offense (3.20 goals per game). Nash has played and practiced on the second line, joining linemates David Krejci and Jake DeBrusk and replacing Ryan Spooner, who was traded to New York.

At 6-foot-4, 220 pounds, Nash has plenty of size and strength for a winger. He knows his job with the team is to use those attributes to his advantage.

“It’s to bring my power forward game and be a responsible player and be good defensively and obviously create a lot of offense,” Nash said. “I feel like the older you get, the more the individual goals go away and it’s more about the team goals. Whatever I can do to help the team win and get as far as we can to the ultimate goal, that’s what I’ll do.”

Nash noted he is excited to be on the other side of things Tuesday night at the TD Garden, and have Boston fans behind him rather than against him. Another one of the Bruins’ acquisitions ahead of the NHL trade deadline, winger Brian Gionta, already has a taste of what Boston hockey fans are like.

Gionta, 39, played four years at Boston College from 1997 to 2001. The USA Olympic captain just made it back from Pyeongchang, South Korea before signing with the Bruins Sunday. One of the first texts he got after signing was from Boston College coach Jerry York.

Unlike Nash, Gionta’s role with the team is more uncertain. He is expected to be a healthy scratch for the Bruins Tuesday night, as fellow newcomer Tommy Wingels plays the role of third-line center. Wingels was not at morning skate Tuesday, but he has more experience at center and on the penalty kill unit.

Gionta had 15 goals and 20 assists last season with the Sabres. But in his first week with the Bruins, all Gionta is trying to do is fit in.

“I’m just here trying to help out whatever way I can,” Gionta said. “I said it coming in a whatever role is asked, I’m here to help and be a part of it, but you don’t want to disrupt too much. They’ve got a great group. I just want to come in, blend in and fit in where I can.”

While he skated with many of Boston’s players for the first time Tuesday, Gionta isn’t totally unfamiliar with everyone in the organization. The former New Jersey Devils forward played with current Bruins assistant coach Jay Pandolfo for the better part of a decade between 2001 and 2009. Gionta referred to Pandolfo as a “longtime friend,” but knows seeing him as one of his coaches is a sign he’s getting old.

“You know you’re getting up there,” Gionta said. “It’s no secret where I am with age. It’s fun to still be a part of it.”