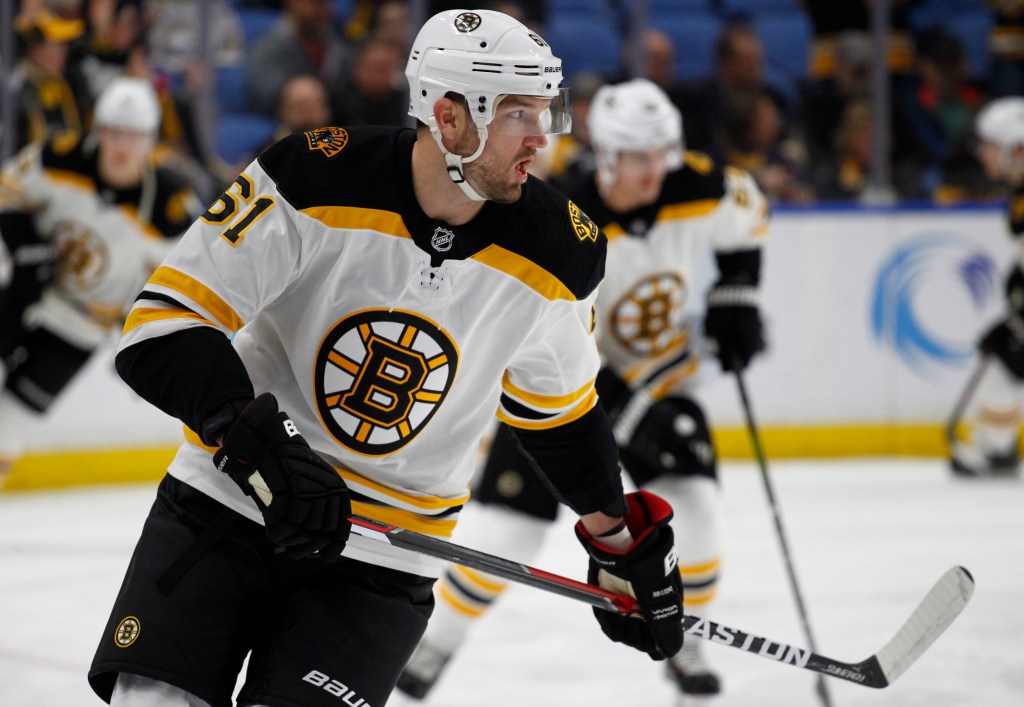 BUFFALO, N.Y. — The Boston Bruins continued solidifying their playoff push by acquiring forward Rick Nash in a multiplayer trade with the Rangers that leaves New York retooling for the long-term future.

The Bruins won the Nash sweepstakes by acquiring the 33-year-old forward in a deal on Sunday, a day before the NHL’s trade deadline.

The Rangers acquired the Bruins’ first-round pick in this year’s draft as well as forwards Ryan Spooner and Matt Beleskey, defenseman Ryan Lindgren and a seventh-round pick in the 2019 draft.

Nash has topped 30 goals in eight of his 15 NHL seasons and joins a Bruins team that ranks third in the Eastern Conference standings with 82 points. Nash is in the final year of his contract and is eligible to become an unrestricted free agent this summer.

Boston wasn’t done adding to its roster by signing Brian Gionta to a one-year $700,000 contract. Gionta returns for a 16th NHL season after serving as captain of the United States Olympic team, which was eliminated following a loss to the Czech Republic in the quarterfinal round at the Pyeongchang Winter Games on Tuesday.

The Bruins play at Buffalo on Sunday and are coming off a 4-3 loss at Toronto on Saturday night.

Nash is traveling to join the Bruins and will be eligible to play.

This marked the second trade between the two teams this past week. On Tuesday, the Bruins acquired veteran defenseman Nick Holden for prospect Robbie O’Gara and a draft pick.

For the Rangers, trading Nash further signals their plans to overhaul the aging core of a roster that helped New York make the playoffs in each of the previous seven seasons, including the team that lost the 2014 Stanley Cup Final in five games to Los Angeles.

The Rangers are slipping out of playoff contention in going 5-16 in their past 21 games since Jan. 7, and have lost six straight in preparing to host Detroit on Sunday.

Adding the Bruins’ first-round pick gives the Rangers nine selections in this year’s draft, including six in the first three rounds.

New York might not be done dealing with captain Ryan McDonagh also considered to be on the trading block.

And with Nash off the market, the focus of trade attention also turns to whether Sabres forward Evander Kane and Ottawa Senators defenseman Erik Karlsson will also be dealt by Monday afternoon.

Kane has already acknowledged he expects to be traded, and was held out of Buffalo’s 5-1 loss at Washington on Sunday.

The Rangers took the same approach with Nash by having him sit out their previous two games to avoid the possibility of getting injured.

Nash has 18 goals and 28 points in 60 games this season. He was selected by Columbus with the No. 1 pick in the 2002 draft and played his first nine seasons with the Blue Jackets before being traded to the Rangers in a multiplayer deal in July 2012. Overall, he has 434 goals and 799 points.

The Rangers saluted Nash following the trade by posting a note on their Twitter account by thanking him for “6 memorable years as part of the New York Rangers family. … Once a Ranger, always a Ranger. We salute you!”

Spooner is expected to make his Rangers’ debut against Detroit.

Beleskey has 10 seasons of NHL experience, including the past three with Boston. He had no points in 14 games with Boston before being demoted to the minors in December.

The 39-year-old Gionta held off signing with an NHL team in free agency last summer in order to pursue an opportunity to compete at the Olympics. He spent the previous three seasons as captain of the Buffalo Sabres. He was also captain of the Montreal Canadiens, and won a Stanley Cup with New Jersey in 2003.

The signing marks a homecoming of sorts for Gionta, who spent four seasons playing for Boston College. Gionta is from nearby Rochester, New York, and has a home in Buffalo.