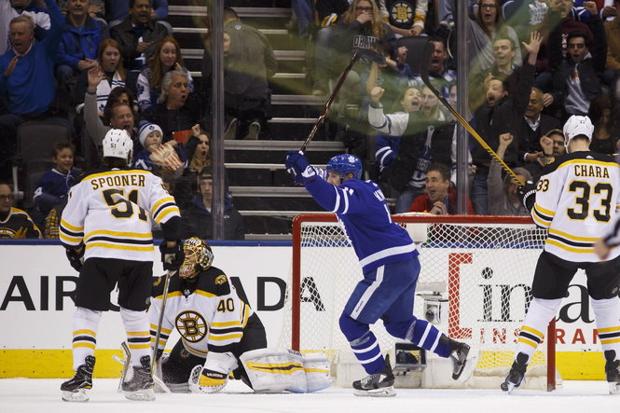 A controversial goal put an end to the Boston Bruins’ hopes of securing a point on the road against an Atlantic Division foe, as Maple Leafs defenseman Ron Hainsey lit the lamp with 1:23 left in regulation to hand Boston a 4-3 loss Saturday at the Air Canada Centre.

Before Rask was able to fully recover, Hainsey’s shot sailed home to secure two points for the Maple Leafs — with the officials ruling the tally as a good goal after a lengthy review.

Brad Marchand and Jake DeBrusk both scored for the Bruins, who fall to 37-14-8 on the season and now fall to third in the Atlantic Division — one point behind Toronto. However, Boston still has five games in hand on the Maple Leafs.

Toronto left Marchand uncovered in the slot and paid the price at 6:11 in the first, as the winger gathered a feed from David Pastrnak and snapped it past Toronto goaltender Frederik Andersen to open the scoring.

The lead did not last for long — as Toronto countered off of Mitch Marner’s 16th goal of the season just 1:04 after Marchand’s tally.

Boston was called for too many men with 9:37 left in the first — a miscue that allowed the Maple Leafs to secure its first lead of the evening.

Just seven seconds into the man advantage, Nazem Kadri benefited from a bouncing puck that ricocheted off of James van Riemsdyk and towards him. Kadri knocked the offering home to make it a 2-1 game with 9:30 remaining in the frame.

Boston’s top line of Patrice Bergeron, Marchand and Pastrnak were at it again with 4:58 to go in the first. Fighting for the puck along the boards, Bergeron casted the biscuit out to Pastrnak below the goal line, who set up Marchand with a behind-the-pack pass for Marchand’s second goal of the evening.

Boston regained the lead just 1:55 into the second, with DeBrusk snapping a five-game scoreless drought off of a great setup from Ryan Spooner. With Spooner skating along the boards, the winger fired in a feed that DeBrusk deflected past Andersen for his 12th goal of the year.

DeBrusk’s tally was just about the only highlight for the Bruins in the second period, as Toronto outshot Boston by a 16-2 margin — culminating in Kadri’s second goal of the evening at 19:04, tying things up once again.

The back-and-forth matchup seemed destined for overtime, but Hainsey’s first goal since Dec. 23 gave Toronto the lead for good with 1:23 to go.

The Black and Gold are right back at it Sunday, with Boston closing out its extended road trip with a matchup against the Buffalo Sabres at 5 p.m.