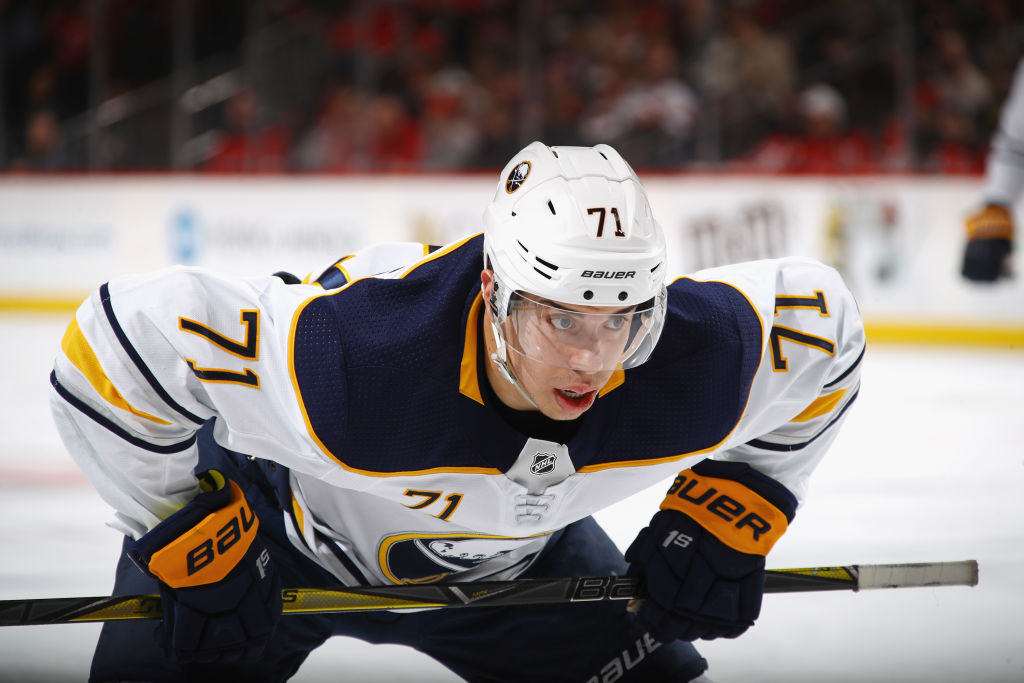 Coach Phil Housley said Tuesday he only knows Danny O’Regan from what he heard Monday when the Buffalo Sabres acquired the former American Hockey League Rookie of the Year from San Jose as part of the Evander Kane trade. O’Regan is heading to Rochester initially but Sabres center Evan Rodrigues has full knowledge of the organization’s newest name.

Rodrigues played with O’Regan for three years at Boston University. When Rodrigues was a senior and O’Regan was a junior in 2014-15, they were joined on a line by a freshman center named Jack Eichel.

“It was a welcome surprise when I heard about the trade,” Rodrigues said Tuesday in KeyBank Center. “His hockey sense, smarts and being able to read plays is there. He’s always in open areas without guys around him. He’s one of those guys who always stops at the netfront poking in rebounds and has really soft hands around the net. I think you’ll see that with him. He has a knack for goal scoring, finding open areas and he can make plays.”

O’Regan had 23 goals and 58 points last year for the San Jose Barracuda, the Sharks’ AHL affiliate. He had just seven goals and 25 points this year in 31 games.

“I texted him. I’m sure he had a whirlwind of stuff going on but he was excited,” Rodrigues said. “I was happy for him and he’s happy to get a new opportunity.

Eichel, meanwhile, watched practice from the stands Tuesday along with defenseman Zach Bogosian, who is out for the year after hip surgery. Eichel, who does not have a walking boot on his injured ankle, has not been made available to the media since he was hurt Feb. 10 in Boston; under NHL rules, injured players do not have to speak until they return to practice.

Sabres add O’Regan, ex-linemate of Eichel and AHL Rookie of the Year

Goalie Robin Lehner laughed off a report Monday that he had asked to be traded. A local blogger who does not cover the Sabres or professional sports suddenly emerged on deadline day with an unsourced tweet that Lehner had “made it known” to management he wanted to be dealt prior to the deadline.

“That was fake news,” Lehner said. “It’s funny how it works. Some blogger puts something out and I don’t even know who that guy is and people seem to jump on it. A bunch of Swedish websites, serious websites, quoted that one. It’s hilarious in this day and age you don’t have to put a source on it. It’s not true. I’m happy. I’m still a Sabre.”

Lehner, who will be a restricted free agent after the season, is thankful the Sabres have given him his best chance to be an NHL starting goalie over the last two years.

“One hundred percent,” he said. “I have no reason not to want to be here. The season has been what it’s been, but I’m trying hard every day to get better and I’ve learned to really like it here. .. I have no reason to want to get out of here.”

Evander Kane was scheduled to make his debut with the San Jose Sharks Tuesday night in SAP Center against the visiting Edmonton Oilers. After flying from Buffalo Monday and arriving in the Bay Area around midnight Pacific time, Kane strode right on to the Sharks’ top line with captain Joe Pavelski at center and Joonas Donskoi at right wing.

“I’ve been a healthy scratch the last two games, so just trying to get the legs going a little bit,” Kane told San Jose reporters, referring to the Sabres’ two weekend contests that he was forced to sit out to avoid injury. “Get the hands going and just do what I do best and hopefully the rest will take care of itself.”

The Sharks certainly could use Kane’s help offensively. Their power play was in an 0-for-20 slump and they scored just seven goals on a 1-2-1 road trip that ended with three straight losses. Tuesday’s game opened a six-game homestand. In addition to knowing several of the Sharks players — injured center Joe Thornton picked him up at the airport — Kane said he knew head coach Peter DeBoer and all of the staff. Assistant Dave Barr coached him with the Sabres under Dan Byslma in 2015-16.

“It’s just nice to play some meaningful hockey,” Kane said. “Every game is very important, every point is very important. I’m looking forward to tonight and moving forward here, playing some playoff-style hockey down the stretch to be able to get into the playoffs.”

The Sabres called up Seth Griffith from Rochester to be an extra forward on their Florida road trip. Kyle Okposo missed practice Tuesday because his wife went into labor and his status for the trip is uncertain.

Griffith has 13 goals and 21 assists in 36 games for the Amerks this season. He had two goals and an assist for the Sabres in an 18-game stint that began when he made the opening night roster and stretched until Nov. 25.