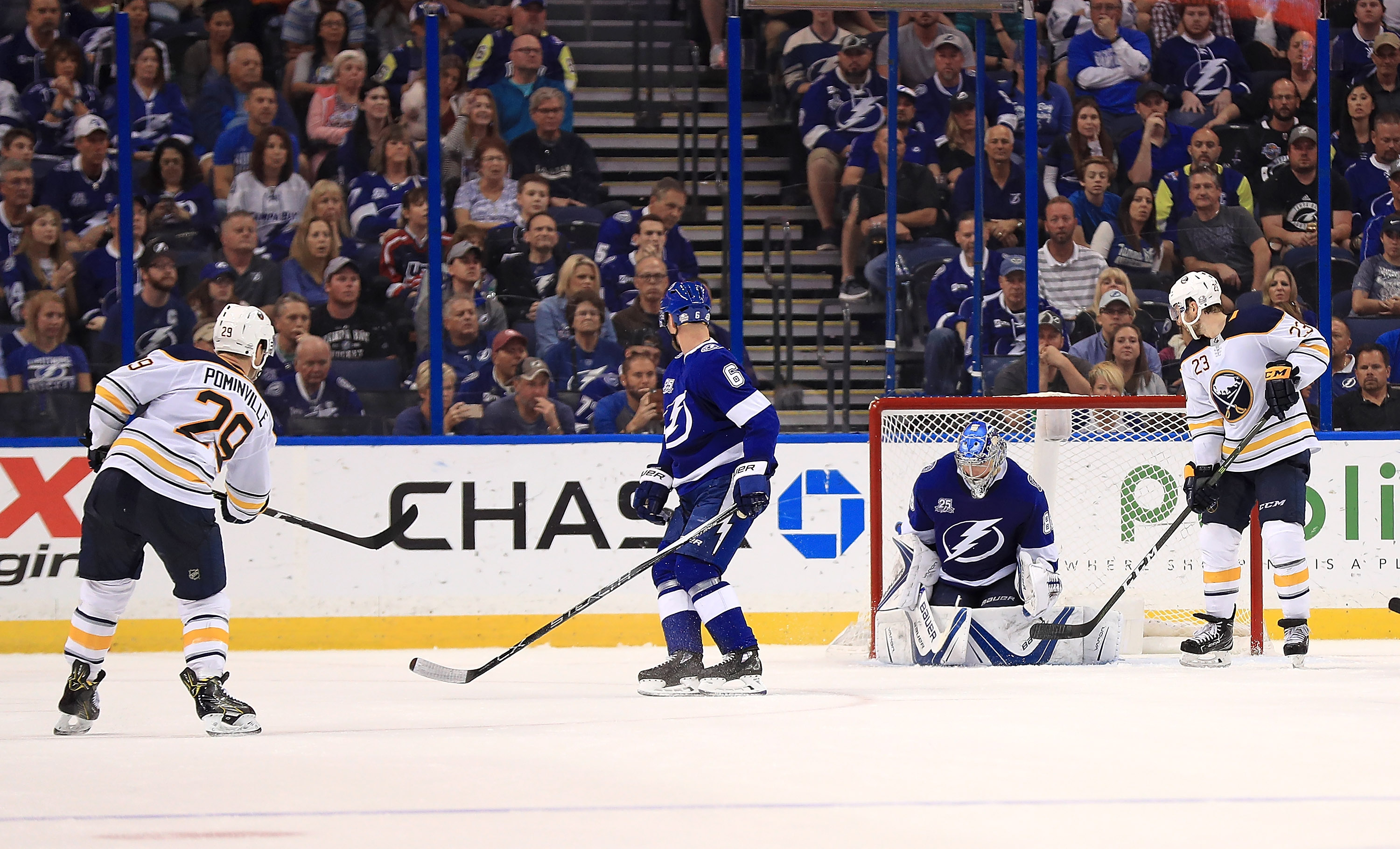 TAMPA, Fla. – Jason Pominville didn’t want to let on that it was bugging him, but heck yeah it was bugging him. He’s been a point-producer his whole life. To have no goals in 20 games and just one in the last 34 was not fun.

“You’ve gotten to know me through the years,” the Buffalo Sabres veteran said Wednesday night. “I was definitely getting a little frustrated, but I don’t want to show my emotions. I don’t want to let my teammates know, but yeah, it was starting to get to me.”

He can finally exhale.

Pominville’s power-play one-timer in overtime eased his mind and lifted the Sabres to a 2-1 victory over Tampa Bay. The right winger’s 10th goal of the season was a long time coming. He hadn’t scored since Jan. 9 versus Winnipeg.

“It was nice to have a chance to get out there and pull through for the guys,” Pominville said in Amalie Arena. “I know I can contribute offensively. I’ve always done it. I was brought in here probably for that reason and for other reasons. The offense probably wasn’t the only thing, so I want to make sure I bring the other things to the table as well.

“To be able to contribute is always nice. Definitely nice to get a winner.”

The Sabres were willing to take on the final two years of his contract, which has a salary-cap hit of $5.6 million, because they needed veterans who play the right way. They also figured there were a few goals left in his stick, but it’s been fewer than they figured.

As the scoring dried up, the 35-year-old was determined to keep the same demeanor he showed when he started well.

“I want to bring the other things whether it’s habits, practice, try to change the culture and get moving in the right direction as a team and as an organization,” Pominville said. “Even though I wasn’t producing, I wanted to stick to the other things I did well.”

Pominville assisted on the Sabres’ tying goal with 8:13 left in the third period, pushing the puck to Evan Rodrigues for a far-side shot just inside the post. It was the seventh multipoint game of the season for Pominville, who had been kept off the score sheet in 29 of the previous 35 games.

The game-winner wasn’t without controversy. Sabres right wing Sam Reinhart grazed Lightning goaltender Andrei Vasilevskiy a few seconds before the shot. Vasilevskiy chucked his stick down the ice when the referees didn’t judge it as goaltender interference.

While the Lightning argued, the Sabres headed toward their dressing room.

“The guys seemed pretty confident it was going to be a goal,” Pominville said. “Knowing my luck lately, I was like, ‘Oh, man. Watch this get turned around.’ But we were able to get it, so it was nice.”

While Pominville received the game-winning kudos, the entire team deserved them. Buffalo held the NHL’s highest-scoring team to just six shots in each of the first two periods and finished with a 34-22 edge.

Buffalo didn’t score until its 26th shot after hitting posts, crossbars and getting robbed by Vasilevskiy.

“We didn’t panic,” Sabres coach Phil Housley said. “From top to bottom I think everyone contributed.”

The Sabres won their second straight game and are 3-1 in the last four. They finally reached 20 victories, upping their record to 20-33-11. Their second win in a row over the Lightning dropped the league’s best team to 43-18-3.

“We got what we deserved,” Sabres goaltender Chad Johnson said. “We played a really good game.”