Sabres ready to rest, react as off day coincides with NHL trade deadline

Benoit Pouliot knows what Monday is. It’s the day of the NHL trade deadline, a time when the hockey world turns its attention toward the league’s movers and shakers.

“The kids and family,” the Buffalo Sabres forward said Sunday after a 4-1 victory over Boston.

Pouliot knows to keep his phone nearby, however. The Sabres will be sellers by the 3 p.m. deadline, and anyone not named Jack Eichel could wind up somewhere.

“It’s always an interesting day during the year,” Pouliot said in KeyBank Center. “There’s always something going on. You hear the rumors and stuff, but we’ll see.

The phone will be ringing for Sabres General Manager Jason Botterill. He still has to move left wing Evander Kane, who is the prime target remaining after the Bruins sent a first-round pick, a prospect, two players and a seventh-round pick to the New York Rangers for right wing Rick Nash.

That would be an ideal haul for Buffalo, which could be among the league’s busier teams.

“Some people are maybe looking to get traded, and some people aren’t,” goaltender Chad Johnson said of the deadline in general. “It depends on where you’re at in your career and what you’re looking for. Everyone has different perspective on things.

“Obviously, when you move past it, you can move forward whether you continue to stay somewhere or move on.”

It’s a rare deadline for Buffalo because of the off day. In the past, they’ve either had practice or a morning skate. They scattered Sunday night, and it’s a certainty the entire group won’t be together when it returns to the arena Tuesday.

The coach said he and Botterill share a similar vision for the Sabres’ future path, one that will start in earnest with the move of Kane. This season has been unacceptable, so any newcomers and holdovers will be expected to adjust their focus once the deadline comes and goes.

“You just kind of watch and see what happens,” center Evan Rodrigues said. “If you stay, you’re obviously happy to stay. If you get moved, there’s a reason for it.” 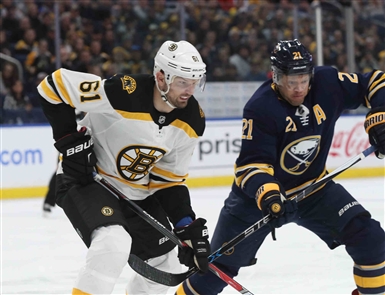 The absence of a Sabres practice isn’t the only change for deadline day. The intrigued players and fans will have two viewing options.

NHL Network will again simulcast the deadline coverage from Sportsnet, the league’s official Canadian partner, starting at 8 a.m. ESPN is also getting into the act. It will simulcast TSN’s coverage on ESPN3 from 8 a.m. to 6 p.m., and it will also be shown on ESPN2 from 2 to 4 p.m.

“It’s an uneasy day and time of year for everyone, but it’s part of the gig and what we signed up for,” defenseman Justin Falk said. “We’ll see what happens.”

Mike Harrington: Time for the GM to make his mark

Like Pouliot, Falk has a lot of family time planned for the off day. The defenseman can also use some rest.

Falk was one of five players stuck on the ice for a ridiculous shift during the second period. Boston hemmed Buffalo in its zone, firing 10 shots before the Sabres could make a change. Nathan Beaulieu was on the ice for 4:02, and the other shift lengths were 3:42 for Falk, 3:22 for Johan Larsson and Jason Pominville, and 3:02 for Pouliot.

“I’ll retire before I have another shift like that,” Falk said with a grin.

Aside from that shift, Buffalo kept Boston relatively quiet in winning for the third time in four meetings. Four players scored, 10 had points and Johnson made 34 saves.

“It goes to show you when everybody’s focused and prepared and ready to play and playing for each other, we’re a different hockey team,” Housley said.

They’ll be a different hockey team after 3 p.m., too.