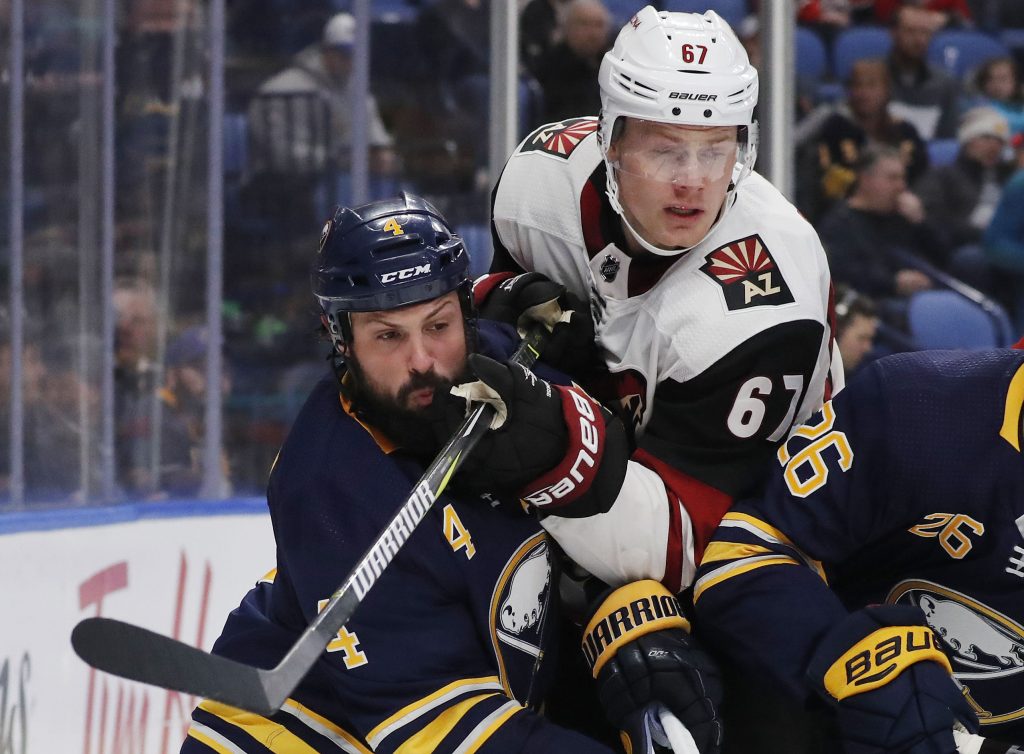 CALGARY – Before the Buffalo Sabres touched a puck Tuesday morning in Scotiabank Saddledome, they revisited what went wrong in a 7-2 loss to the Edmonton Oilers one night earlier.

During an extensive pre-practice film session, coach Phil Housley pointed out the numerous breakdowns that led to arguably the team’s worst loss of the season. The message was clear: The Sabres will be embarrassed again if they repeat those mistakes Wednesday night against the Calgary Flames.

Though only so much can be accomplished in a one-hour on-ice session, all involved expressed confidence afterward that they are aware how to fix all that’s gone wrong over their past 21 games.

“I think it’s more being honest with each other,” Housley said of the film session. “Obviously we didn’t like the way we played. To move forward sometimes you have to take a step back and look back at what’s going on. A lot of it is the odd-man rushes, puck management and just having a greater respect when we don’t have the puck that something bad can happen. Obviously we didn’t have enough respect yesterday and it cost us.”

Offense hasn’t been the problem as of late. The Sabres received supplementary scoring from Conor Sheary and Evan Rodrigues on Monday. Additionally, their offense had 43 shots on goal and 72 shot attempts.

However, the Sabres were irresponsible with and without the puck. Rasmus Ristolainen’s unforced turnover led to Connor McDavid’s second-period breakaway goal, and less than five minutes later, Marco Scandella passed the puck right to Milan Lucic, who skated alone into the slot before beating Carter Hutton with a wrist shot to make it 5-2.

The Sabres have struggled in their defensive zone all season. They have not finished checks, which allows an opponent to maintain possession, and poor play by defensemen and forwards had led to too many odd-man rushes.

Goaltending bailed them out during the 10-game winning streak but has not been as consistent lately.

Entering Tuesday’s games, the Flames (30-13-4) ranked second in the NHL with 64 points and had scored the second-most goals (173), with a plus-42 goal differential. Calgary has four players with 20 or more goals, including Johnny Gaudreau, who has a team-high 27 goals with 42 assists and a plus-21 rating in 47 games. Conversely, Jeff Skinner is the only Sabres player with more than 20, though he entered Tuesday ranked second in the league with 30 goals.

Housley did not overhaul his lines, defensive pairings or personnel in preparation for the Flames. Lawrence Pilut skated alongside Rasmus Ristolainen in practice Tuesday after Pilut was a healthy scratch against Edmonton.

His replacement in the loss, Nathan Beaulieu, was partly responsible for the Oilers’ third goal in one minute, 55 seconds during the first period. Despite his inconsistent play, Scandella remained among the top-six defensemen. He ranks second-to-last among Sabres defensemen with a negative-75 shot differential during 5-on-5 play.

“Obviously it’s not a game that we like, but we can’t do anything about it right now,” Housley said. “We have to move forward. Learn from it because we’re playing a dangerous team. If we do the same thing we’re going to be in the same situation.”

In response to the loss, Housley used practice to have the Sabres improve forechecking, backchecking, outlet passes on breakouts, cycling the puck in the offensive zone and physical play around the net. The Sabres have made it too easy for opponents in the defensive zone.

Entering Tuesday’s games, the Sabres had allowed the sixth-most unblocked shot attempts close to the net during 5-on-5 play since winning their 10th consecutive game Nov. 27.

“We’re obviously not as bad as it’s been right now, and we’re probably not as good as winning 10 in a row,” Hutton said. “It’s one of those things just finding that consistency in our game and it’s something we’re struggling with, but rightfully so. We have a lot of 18-, 19-year-olds in our lineup that sometimes they show their age and sometimes our veterans guys haven’t been as consistent as we need to be.”

The veterans were the problem against Edmonton. Rasmus Dahlin had a team-high six shots on goal with 12 attempts in what Housley called the rookie’s “best game up to date.” Additionally, Casey Mittelstadt scored his seventh goal of the year, and Tage Thompson was robbed on a breakaway.

Hutton and Skinner said they have noticed a lack of confidence recently when the Sabres trail in games. That wasn’t the case during the winning streak.

“We have to just stick together in here,” Hutton said. “No one is coming to save us. We’ve got to battle through it. It’s going to be hard and we have to get back to that attitude that when we were down it didn’t matter.”

Sabres work to correct mistakes ahead of matchup against Calgary