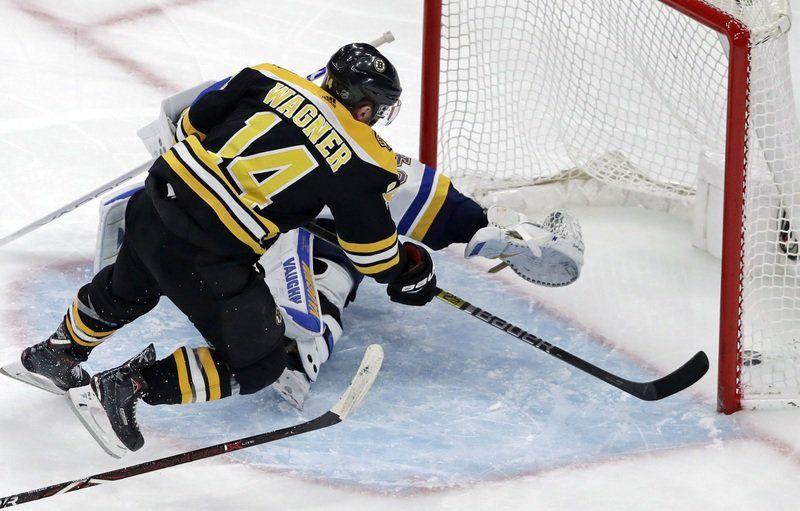 BOSTON — It was a near-perfect scenario for a natural born goal scorer like Ryan Donato.

St. Louis Blues defenseman Joel Edmundson coughed the puck up as he attempted to break it out of his zone 11-and-a-half minutes into Thursday night’s game against the Bruins at TD Garden.

Forechecking on the play, the 22-year-old Donato pounced on the loose disc at the top of the near circle and bore in unimpeded on goaltender Jake Allen. Donato had time to deke the netminder or force him out of his crease; instead, he fired off a 20-foot snapshot from the slot that Allen easily absorbed for the save.

For the time being, the secondary scoring woes that have plagued the Bruins of late continued.

But on this night, which ultimately resulted in a 5-2 victory, that would change.

One evening removed from being a healthy scratch for the first time in a dozen years, David Backes tipped home a Zdeno Chara power play slapshot from the point late in the second period, giving the 34-year-old just his second goal in the last 15 games and his fifth of the season.

Scoring from guys in Black and Gold sweaters not named Brad Marchand, Patrice Bergeron and David Pastrnak has been lacking, particularly of late. Part of the reasoning behind that is just how talented Boston’s top trio is; their 59 goals represent nearly 42 percent of the team’s 141 tallies to date. They combine to score big goals, late goals, power play goals, momentum-changing goals and any other type of goal you can think of.

The rest of the team’s forwards, however, have had a difficult time lifting some of that scoring burden off of them. And until the Bruins can develop a second (and even third) line they can comfortably throw over the boards and look for scoring punch from, their long term outlook will be the hockey equivalent of horseshoes and hand grenades; close, but no cigar.

Finding a suitable forward who can stick with DeBrusk and Krejci and find chemistry with them has been an ongoing source of frustration for the Bruins. The latest addition is Peter Cehlarik, a 22-year-old Slovakian left wing when netted a pair of goals Wednesday night in Philadelphia after being called up from the Providence Bruins. (The duo both assisted on Boston’s first goal Thursday night, with Krejci threading a pass to defenseman Torey Krug cutting through the slot early in the second period).

In the last month alone, the Bruins have rotated a half-dozen forwards in that role on the second line, looking for the right mix. In addition to Cehlarik, Danton Heinen, Kuraly and the currently injured Joakim Nordstrom have had auditions at left wing, while David Backes and Donato have ridden with DeBrusk and Krejci on the starboard side.

No matter who’s there, there hasn’t been consistent offense generated. Both Heinen and Donato have one goal and one assist over their last 10 games; Forsbacka-Karlsson now has three assists over the last dozen games as a third or fourth liner; Nordstrom was held off the scoresheet for the last six games before suffering a fibula fracture during the Winter Classic; and it’s important to point out that half of Krejci’s 10 goals came when he was filling in for an injured Bergeron, benefiting from feathery feeds from Pastrnak and Bergeron.

The most maligned member is one of the team’s nicest guys, Backes. A lightning rod for criticism because of his a.) $6 million annual salary, which he’ll be paid for another two years after this one, and b.) his old-school ways in an ever-increasing faster NHL, So last night’s goal, in which he parked himself in the slot and took a pounding before getting his stick blade on Chara’s shot, was both timely for the team and the man himself.

It was a good night for the Bruins, what with their four goals scored over the last 24 minutes while playing their third game in four nights.

There will be even better nights ahead if the forwards slotted 4th-through-12th in the lineup can find a way to chip in with more regularity, similar to what they achieved Thursday night.