The Lottery Look for Thursday, January 17: A big night for the idle New York Rangers – FanSided

New York Rangers: Finishing among the bottom three is imperative by Steve Paulus 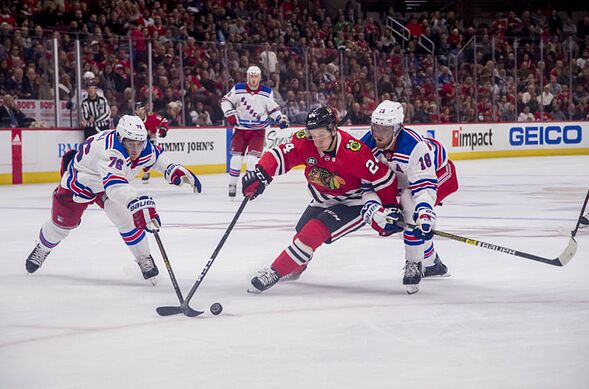 It’s clear that the New York Rangers are going to do their best to win every game that they can.  If they do that, they’ll need some help from their fellow lottery contenders to get to a top five lottery pick.  Tonight, they got a lot of help.

There were five games in the NHL tonight, all featuring lottery contenders.  They were going up against some of the best teams in the league so the key word of the night was “upset.”   The four teams that needed an upset got one.  The fifth game was between two lottery teams…so they needed to go to overtime.  They did.

What it means is the Rangers moved down one slot and are now the 8th worst team in the NHL, five points better than the Kings, last overall.

The first upset of the night was the Philadelphia Flyers beating the Bruins. The Flyers jumped out to an earlier lead and led by a Sean Couturier hat trick, won 4-3.  That gives Philadelphia 42 points, only three below the Rangers.

Next came the Senators hosting the Avalanche.  The Sens were the worst team in the league going into the game and they still upset Colorado 5-2.  It was Matt Duchene’s return to Colorado and he scored twice. That win moved Ottawa out of last place.

The Sabres are a lottery team right now and they beat the Flames in OT.  That give them 55 points, well ahead of the Rangers.

The Oilers vs Canucks was a game between two teams tied in points, and just a few points up on the Blueshirts.  Either team winning was fine, going to a shootout made it even better. The Oilers won and are four points up on the Rangers with the Canucks  up by three points. Edmonton is about to sneak into a wild card spot.

The last upset was totally unexpected as the Coyotes defeated the San Jose Sharks. The Sharks came into the game undefeated in 2019 and riding a seven game winning streak. Arizona jumped out to an early lead and just kept adding to it. That moves the Coyotes ahead of the Rangers in the lottery sweepstakes.  They both have 45 points, but Arizona owns the tiebreaker.

There are seven games in the NHL Thursday, headlined by the Chicago Blackhawks visiting Madison Square Garden.  The Hawks are second from last place with 41 points and have played two more games than New York.

Four other games have lottery consequences.

Blues @ Bruins – St Louis is on a roll and have moved up from the cellar to ten worst in the league.  They have 45 points like the Rangers, so root for St. Louis.

Devils @ Islanders – I know it is hard to even think of rooting for the Isles or Devils, but New Jersey is two points behind the Rangers and the Islanders are in the playoffs.  So, you have to root for the Devils.

Ducks @ Wild – The Wild need a win to stay out of the lottery.  The Ducks have lost 13 in a  row and are a lottery team now, only two points better than the Rangers. They are getting dangerously close to New York, so root for them to break the losing streak.

Kings @ Stars – Los Angeles has the worst record in the league.  But get this…if they beat the Stars and the Rangers lose to Chicago, only four points will separate the Blueshirts from the bottom spot in the NHL.  Hmmm.

Next: A bottom three finish is really important

This rollercoaster is going to keep going for weeks, but tonight was a big night for the idle Rangers.  Even with the win over Carolina, they didn’t lose much, if any, ground to their lottery rivals.