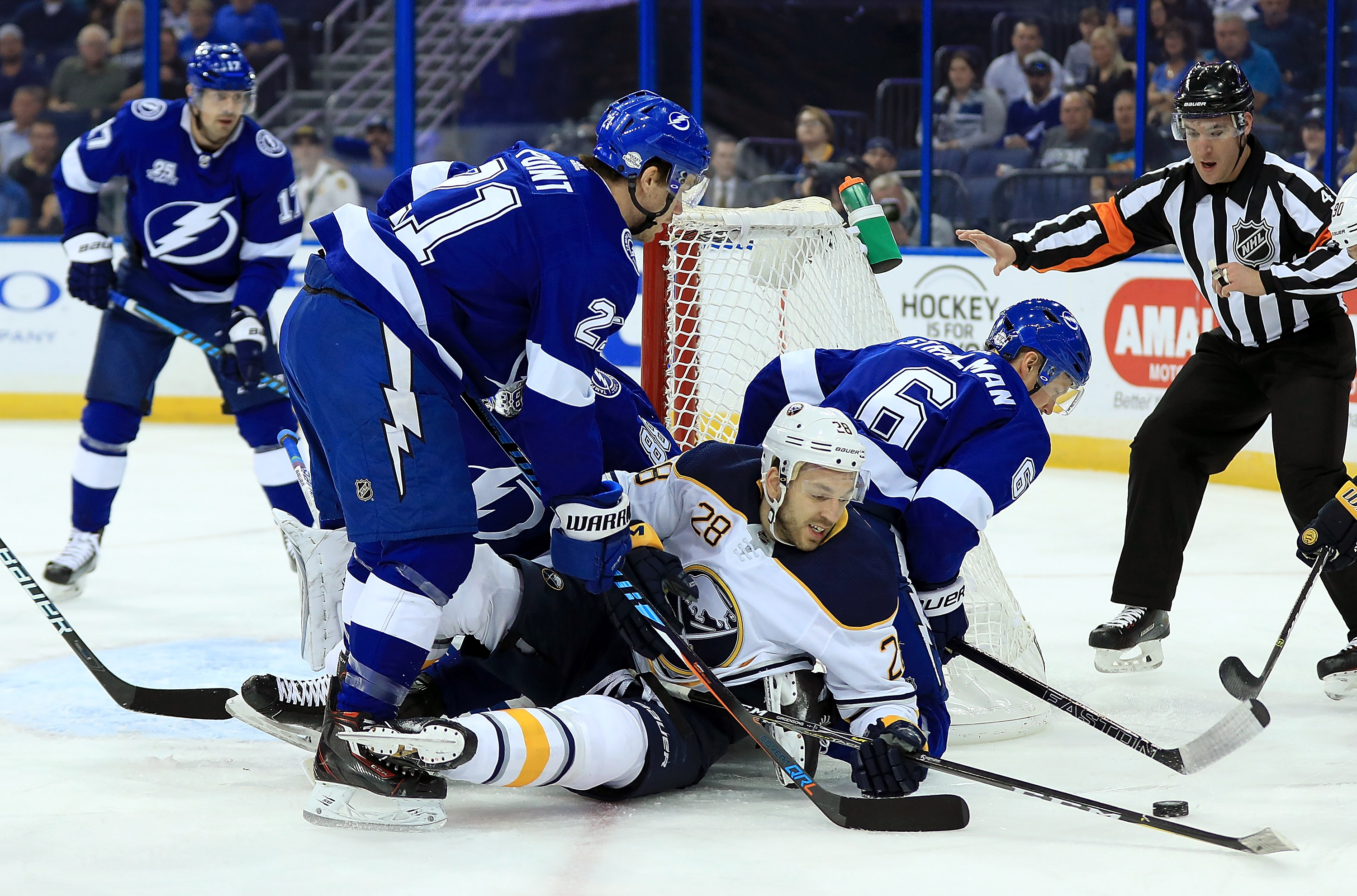 Jason Pominville delivered a power-play winner with 1:26 gone in overtime, giving the Sabres a 2-1 comeback victory. The Sabres beat the Lightning, 5-3, in Buffalo two weeks ago. They’ve won two in a row over the NHL-leading Bolts for the first time since 2013.

The Lightning was without injured leading scorer Nikita Kucherov, who has 33 goals and 82 points in 63 games.

Powerful chances: The Sabres’ power play had two chances to win it late. Tampa Bay’s J.T. Miller, debuting after a trade from the New York Rangers, went for tripping Johan Larsson with 5:07 left.

Adam Erne blasted Larsson into the boards with 19.1 seconds left and was called for an illegal check to the head. It led to a four-on-three situation to start overtime.

Tie it up: The Sabres finally ended the shutout bid of Tampa Bay goaltender Andrei Vasilevskiy with 8:13 to play. Evan Rodrigues cut down the left side, and he put a shot far side just inside the post to make it 1-1.

Rodrigues has goals in back-to-back games and six in 35 outings this season.

Familiar face: The Lightning opened the scoring, and it was former Sabres and Canisius College forward Cory Conacher who did the honors. Johnson stopped defenseman Dan Girardi’s blast from the point, but the only person in front of the net was Conacher. He easily deposited his seventh goal in 28 games with 1:57 left in the first.

In a hole: Despite outshooting the Lightning, 11-6, during the opening 20 minutes, the Sabres headed into the first intermission in a 1-0 hole.

More of the same: The Sabres outshot the Lightning, 9-6, during the second period. Neither team found the net. Both teams had 10 shots during the third period.

Wild sequence: The fans rose to their feet with a standing ovation midway through the second after end-to-end action.

Johnson stoned Tampa forward Adam Erne on two chances. Scott Wilson pinballed a shot that got through Vasilevskiy but didn’t cross the goal line. The Sabres’ Evan Rodrigues rang the post and had another point-blank blast blocked by defenseman Victor Hedman.

The Lightning went to the other end with a breakaway for Brayden Point, but Johnson forced the speedy center to put his attempt off the post.

Close: The Sabres’ short-handed unit nearly made it 1-1 with 10 minutes to play. Vasilevskiy went to the corner and misplayed the puck, which allowed Jacob Josefson to circle the net and attempt a dump-in. Yanni Gourde got his stick in the way, and a diving Vasilevskiy did the rest to keep the puck out.

It’s a girl: Sabres right wing Kyle Okposo and his wife, Danielle, welcomed a baby girl to the world. Okposo didn’t play against the Lightning but is expected to be in the lineup Friday when the Sabres visit the Florida Panthers.

The lines: With Okposo out and Evander Kane traded, the Sabres went with new forward units. Ryan O’Reilly centered for left wing Zemgus Girgensons and right wing Sam Reinhart. Rodrigues was in the middle of Wilson and Jason Pominville. Johan Larsson skated between Benoit Pouliot and Nick Baptiste. Josefson centered for Jordan Nolan and Seth Griffith.

Paying tribute: The Sabres wore a Stoneman Douglas sticker on the back of their helmets to honor the shooting victims at the Florida high school. The decal will remain for Friday’s game.

Counting the house: The sellout crowd of 19,092 included most of the U.S. women’s hockey team, which won Olympic gold last month. The players, including Getzville’s Emily Pfalzer, were honored in a pregame ceremony and smooched their medals during the “Kiss Cam.”

Next: The Sabres kick off their 13-game March with Friday’s visit to Florida. After taking the weekend off, Buffalo will host the archrival Toronto Maple Leafs on Monday.